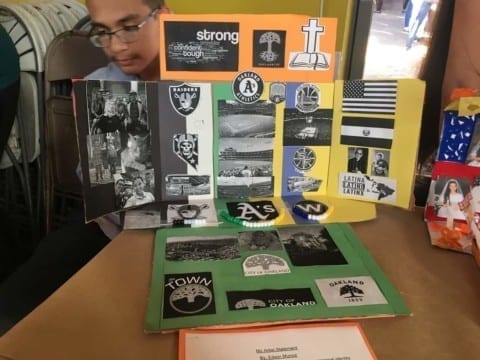 This shadow box represents my parts of my personal identity from a counter narrative, which are being a Oaklander, a Latino, a fan of sports, and the oldest son and brother to the family. In the outside of the box is stereotypes, society’s perception, and the dominant narrative of Latino men and how society sees me like if there’s a target on my back and I’m guilty of something based on my race, sex, and nationality. When people look at me, they see a kid who is probably a immigrant who doesn’t have a future and could be a criminal and drug dealer in the future, but when I’m at school or at home, they see me as a Latino who lives in Oakland, California, loves sports, and is a older brother to his little sibling named Kevin. I have chosen to include my identity as a Oaklander because I was born and raised in Oakland by salvadoran immigrant parents and I’ve honor my ethnicity by adding photos of the family in the U.S. and in E.S (El Salvador). This is a counter narrative of being an immigrant and a bad person because this shows the community that all Latinos and latinas aren’t all immigrants and that some were born in U.S. soil and raised by Latino/Hispanic/Chicano parents and that these sons and daughters do have a future in the U.S. Also, I have chosen to show that I’m a sports fan because this part of my identity represents me the most due to that I like the sports Oakland plays here and the teams of Oakland: the Raiders, A’s, and Warriors. Many people assume that I have no future and that I’ll just become a drug dealer, a criminal, or a homeless Latino man in the streets, but I don’t want to follow those stereotypes and I see myself that I have a future in Oakland and achieve my goals as a student, graduate from high school in 2022, go to college then medical school, earn my medical degree (MD) and have a job as a Pediatrician in Kaiser Permanente, La Clinica, UCSF Benioff Children’s Hospital in Oakland, or Alta Bates Summit Medical Center. I have added 2 photos of religious figures that are important to the Salvadoran culture. The 2 figures are Monsenor Oscar Romero, who was a priest in El Salvador and remember in every town of El Salvador and San Cayetano, also a priest and is recognizable due that he’s holding baby Jesus based on the Bible and is the protector of my mom’s family town, San Cayetano Istepeque.

Dear Edwin,
I can clearly hear the passion in your voice when you speak about your family and your future goals in life which I respect. It’s hard being the first generation as you are the milestone to your family with many expectations and obstacles. With the dedication you have to set a good path for yourself and your family, I believe you can go far! Best of luck in your future endeavors, and out of curiosity, is there a particular reason that inspired you to become doctor? – Audrey Marie

hi Edwin, my mane is robert and i am a Fremont HS student and i really like the way you format your shadow box because it is unique and it is the first time i have seen one like that. plus i see that you have a raiders symbol that is cool.

I really liked how you explained some of the main things that are important to your life. For example being a oaklander, latino, fan of sports, and the oldest son. I liked how you explained some of the stereotypes people think of you. Like how people think that you or latinos are criminals and drug dealers which is the dominant narrative. And your side was that you don’t follow these stereotypes because they aren’t true. I also have a question why didn’t you add cats because don’t you love cats so much? -Yasmin

Dear Yasmin,
I did add a picture of my cat. It just very blurry to see but its on the left with my family pictures. But thank you for you positive feedback on my shadow box and hope you have a great day. Bye!

Edwin, I appreciate how you are proud of where you are from regardless of negative stereotypes that people have about your city. I think that is great to be yourself and not worry about what people stereotype you as.