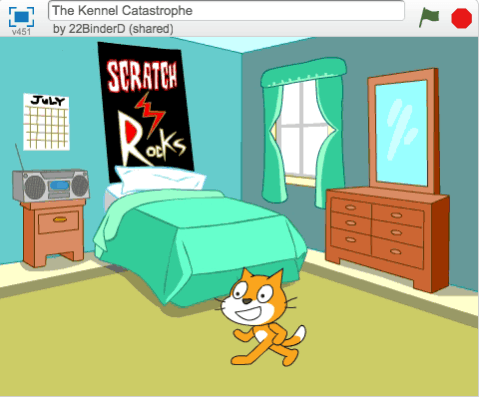 This Is My Scratch Animation

The Process: To make this animation, I first created a script and a storyboard. The script was to first make a layout of my scratch animation and the storyboard was to visualize how my animation would look like. I took a week to make a script and revise it with fellow peers. In the following week, I created a storyboard using storyboardthat.com and revised it other peers. In the final week, I created a schedule to follow so I would know how much of my animation I need to do for each day. In the next few days, I followed my schedule and I completed my scratch animation, leading to the animation shown above.

This is one of my sprites for the animation. This is my script for my animation.

Setting: In space at Nicholas’ Spaceship

Radio: This is Gatalica Radio News reporting live! We have reports that Kennel is causing terror in New York City! If someone doesn’t stop him, he will pose a huge threat to taking over the galaxy! Military and the Police Department are arriving to New York for protection, but will that be enough? Our only hope right now is Nicholas the Cat! He has a variety of powers like flying and strength, but will the 13 year old be enough to save our galaxy?
Nicholas: Oh No! I must go, my galaxy needs me!
[Nicholas exits in spaceship stage right]

Setting: Above planet earth with New York City below

[Kennel terrorizing the city] Kennel: Muahahahaha! We meet again Nicholas! And this time, I will be victorious!
[Kennel fires a fireball at Nicholas] [Nicholas dodges to the side] Nicholas: Ha! You missed and now I will get you!
[Nicholas chases Kennel] [Kennel morphs into rocks] Nicholas: Wait what? Where did he go?
[Wrecked building collapses in front of Nicholas] Nicholas: Ahhh! That was really close! He’s too strong for me right now. I’m going to have to go to Pixel Bit to learn Kennel’s weaknesses.

[Kennel terrorizing the city] Kennel: Muahahaha! Nothing can stop me now! I will take over the world!
Nicholas: Not so fast Kennel! I will defeat you now! Now I have the Dranko Ghostblade!
Kennel: Hahaha! My plan worked!
Kennel: When my father gave you the sword, that was really me! It’s just plastic and it does absolutely nothing!
Kennel: Remember my new power? I can transform into anything!
Nicholas: I knew that sword felt light! I’m just gonna have to resort to my usual weapon!
[Kennel fires a ball of energy at Nicholas] [Nicholas parries the ball and it explodes] [Nicholas pants from exhaustion] Kennel: Tired already? I’m only getting started! Hahaha!
[Kennel fires a fireball at Nicholas] [Nicholas gets hit by the fireball and is destroyed] Kennel: Muahaha! Nothing can stop me now!\
Kennel: I will rule the galaxy now, and there are no obstacles!
Kennel: I will take over earth, and soon the whole galaxy!
Kennel: My next target, Pixel Bit! Muahahaha!

Wow that was awesome. It’s really nice how you made your own characters and a legit script for the whole thing. Planned out very well and it is a interesting little story. Only one suggestion: Is it possible to make the text dialogue frames longer in the animation, I just had a tough time being able to finish reading every little piece of dialogue. Good job though!

Cool… i will have to try that