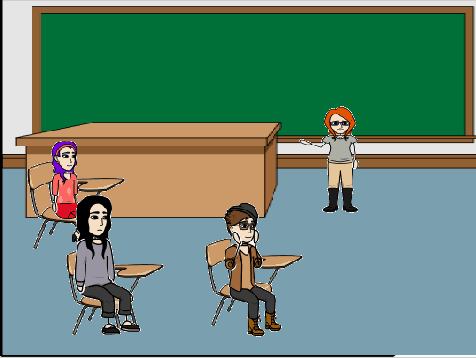 I made an animation for a tech project which was indeed a rollercoaster of emotions. It was about a school shooting which is a major problem in today’s society. There was exactly 6 characters who had lines. The first one being Ms. Hefter, who was an English teacher for some reason I don’t know. It’s pretty ironic because she could barely speak it herself, hence the accent. Then there’s the director, he has to deal with over 300 bratty kids. The shooter who is actually a demon. Dean and Sam Winchester who were there because there was a supernatural being, and they’re in a show called “Supernatural” (please don’t sue me). Lastly, there was a police officer. So, it started with Ms. Hefter getting a phone call about a death threat. Then, she told the director. The day of the “shooting” the shooter enters, get knocked out and interrogated. He is then disintegrated. It took me about 3 days to make it leisurely. But, due to technical difficulties, I had to start from scratch. It was like pulling teeth to make it because it was so frustrating.

Link to the script and side information: