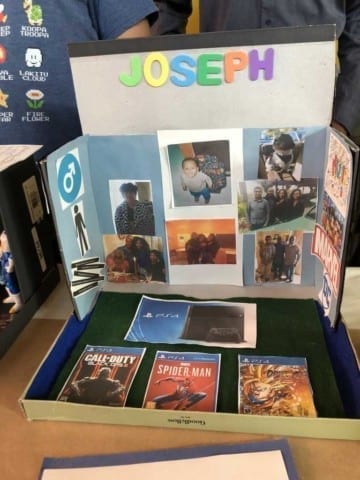 My Shadow box is separated by two main things. The outside of my shadow box represent dominant narratives and stereotypes about my identities and the inside represents my counter narrative and parts of me that make me who I am.

On the outside in the back of box I include pictures of a danger sign, a gun, and marijuana. These pictures show the dominant narratives of black people that we all smoke weed and we are violent and dangerous. The right outside of my box I include a picture of a bunch of different sports equipment such as a football, soccer ball, and basketball. I include this to show the stereotype that since I’m a teenage boy I should like playing sports since that’s something that teenage boys commonly like to do. And finally, on the left side of my box, I include a picture of a man lifting weights and a stereotypical picture of the male brain. The image of the man lifting weights  is important because it represent the belief that people of the male sex should be big and strong. I included the picture of the male brain because it perfectly represents what people assume males think about and things we have in our head. So in all, the outside of my box represents the dominant narratives of my race and my sex.

Now moving on to the inside of my box. This part of my box represents my chosen identities and my true self. There are also things that show my counter narrative for some of my identities. To combat the dominant narratives that all black people are violent and dangerous I include pictures of me and my family to show that black people are just as loving and caring as any other race. Furthermore, I combat the belief that teenage males are all interested in sports by having pictures of my actual interests such as music, anime, and comic books. I’ve honestly never really been interested in or realy liked sports. Even though my parents and most people would tell me I should play football or basketball and trying to push me to pursue that. I prefer stereotypical “nerdy” interests, I guess you would call it. And I’m not afraid to admit that because it’s what I’m actually interested in and what I like. Finally, I combat the dominant narrative of males just being big and strong by including quotes that question and challenge male stereotypes. I included this because I read these questions and felt that they were all questions I thought about at one point in my life as a male. So I wanted to include that because of that strong reaction I had to them.

All together, my shadow box includes dominant narratives and stereotypes I believe are forced onto me because of my assigned identities along with my counter narratives and my chosen identities showing how I see myself and how I wish to be seen.

Hi Joseph,
I think that your shadow box and post has a very powerful meaning, and the way you displayed it definitely conveyed a message. Your box demonstrates that by stereotyping a person, you miss the opportunity to truly getting to know someone. I also think its great that you show pride in your interests because our interests are a part of who we are.
-Jessica

Dear Joseph,
I really enjoyed reading your post, I especially liked how you separated your shadow box with one side being stereotypes and the other side being what you actually like.
Thanks,
Vanessa Laranjo

Dear Joseph,
Your shadow box is really nice and I can clearly see what demonstrates you and who you are as a person. I really like that you added the gun, marijuana, and danger sign because you really did a good job showing your dominant narratives. After your dominant narratives I really love the way you box flips around and shows your counter narratives and who you truly are. Something that stood out to me was the pictures of family because I did that with my shadow box too. Thanks for your writing. I look forward to seeing what you post next, because your post so far show a lot of effort and it’s inspiring that we have somewhat same ideas.
Thanks,
Wendy Perez Govea

Joseph, I hope all is well and hope things are getting better. All you can is push through and just succeed. You will always have people wishing for you to fail, but instead of reacting negatively, just block them out and continue to be the person that you want to be.