My Opinion On Being An Upstander

Home My Opinion On Being An Upstander 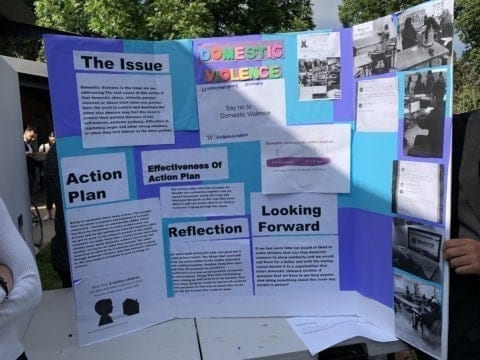 My project was about something we would want to be upstanders for and my topic was Domestic Violence. This topic is very important to me because I feel its talked about as much as it should be which is not okay. What about the people that is going through it they are just sitting in silence which is not helping them.

Being an upstander to me now would have to mean standing up for someone or something that is important to you and making awareness about it.

Next steps I would like to take for this issue would have to be raising money to give to a nonprofit organization that is also helping with domestic violence. Another issue I would like to make awareness for that I start to talk about would have to be is Rape. Some steps I already took for this issue was writing an essay about rape. So I interviewed women and men to hear their perspective on this topic. This topic is important to me because I knew people who are very close to me go through this and it has impacted their lives a lot. Knowing that they are just in silence has impacted me and has made me feel bad bc no one is speaking up for them. Rape is not an topic that is really talked about which needs to change because it needs to be address.

Some advice to upcoming upstanders to start off I’m very happy that you want to stand up for something that is important to you. Something that could help is to make an instagram because if you know that is one popular app and you will get a lot of awareness on there about what your tryna stand up for. Another thing is try to connect with others that also care about your topic because the more people you have the bigger impact, you all equally have skills that can help.

One thing I learned as an upstander would have to be that things I thought I wasn’t capable of I can accomplish. I know I stated this in the beginning of this but if you know me I’m a very outgoing person but when it comes to my knowledge I choose to hold back and not show my true potential. I advise anyone who doesn’t show their true potential like I do, stop now because it will impact you in your grades and how people think of you. So when you have an idea show it and speak your mind because nothing you say is stupid or dumb. Whatever you are standing up for just be passion it about and don’t do it because of your friends. Keep doing you and never give up for something you believe in.

I think that it is extremely important to think of how this issue has changed overtime. Domestic abuse used to be one of the biggest issues by far, just by sheer volume. It was common for a man to come home and beat their wives, and now it is much less so. This is not saying that it is not an issue, I am just saying that it has gotten better over time and that, to some degree, the issue has gotten better. I think that you should bring up the drop in domestic abuse that happened after the introduction of no-fault divorce and how people feel as though they must stay together, even if they hate their partner. Why I bring this up is that you need to bring up the history around domestic abuse to help explain that it is still a problem. Another thing that I think you could bring up is the whole situation around Chris Brown. This situation has a lot of information around it that wasn’t focused upon and I think that it says a lot that Chris Brown has just generally been forgiven for all the terrible things he has done against his partners.