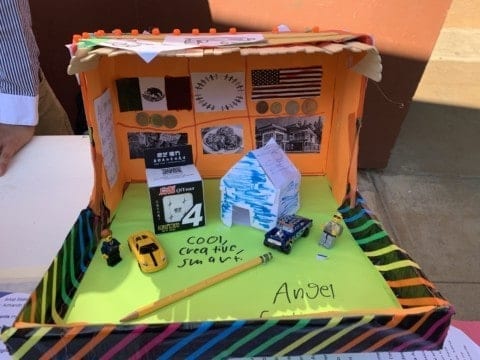 The objects in my Shadow Box represent my faithful self, my counter narratives. When people look at me they see a cool young man with dark hair and brown eyes. While these assigned identities are true they do not tell my true personal story. I included crucial objects in my Shadow Box to represent counter narratives of each of my important parts of my self identity. I included my toy cars, Rubik’s cube, Legos, Money, food, and finally extraordinary grades to show that I’m educated, and proud to be part of the Mexican Ethnicity and American Nationality. Our president brainwashes people to think Oaklanders and Mexicans sell drugs and guns so he can give the power to the upper class. For me, identifying and expressing myself as a Mexican American makes me feel empowered, liberated, and fearless to overcome the oppression I’m going to face in the future. It was also significant to include objects that represent my dominant narratives. These objects represent what people assume about me my Race, Ethnicity, and Nationality. Just because I’m a colored Hispanic people believe I have imperfect grades or that I don’t belong in America which is wrong because I’m a American Citizen who does care about education. Since I’m Mexican and from Oakland people believe I’m a dangerous criminal who like to sell drugs and kill people. Even though there have been tough times in my family involving criminals my predecessors have always tried their best so I wouldn’t end up on the streets, killing, and going to jail. While many of these objects represent my struggle, they also represent my strength, and most importantly my life.

Your box represents your strengths and your weaknesses as you grew up. I appreciate you sharing what you said about the place you grew up in and how a lot of times people judge the area without even knowing it. I also have a Mexican background and hate when people talk down about the ethnicity. It is important that you know no matter what race you are it does not define who you truly are. That being said you have a lot to be proud of coming from a Hispanic background. I love the effort that you put into the box and all of the colors that you used, it truly added a lot of character. Continue to be proud of who you are and what you believe in!

Hi! I’m a student at SJSU and I absolutely love what you had to say and what your box represents. I think that it’s great that you have a great sense of where you come from and where you want to end up. I love that you said that many of the objects in your box represent your struggle but they also represent your strength. That is a very powerful statement that I resonate with the more I read it. To me it means that your past and what you have gone through and overcome does not diminish what you have accomplished and what you are about to conquer in your future. It is a very powerful statement and I recognize that. I think that you have a bright future ahead of you and if you continue to stay focused and fight for what you believe in you will go far in life regardless of what ANYBODY has to say. Have a great school year and prove them wrong!