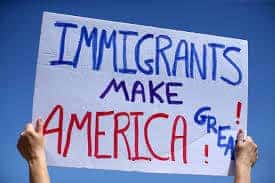 Immigration is the permanent settling in a foreign country. It can be done singularly but has mostly been done in masses. An example of immigration is if a man from Africa decides to moves to America permanently. Mass immigration would be if he decided to bring his whole town, as well as a few other small towns, and they all moved to America together and settled permanently. I was born in America and never lived out of the United States so I, of course, don’t have a personal story to tell but I do have family members who do.

My first experience with immigration regarded my aunt. My aunt was moving to the US from St. Thomas and she continuously was denied. Over and over, she tried but she was denied each time, each time there was a different reason. She ended up giving up and tried again a year later and was finally accepted. When she came she was going through the toughest time trying to get a job, but she finally was able to get her papers and everything else in order and now she’s doing well. Upon hearing the turnout for my aunt, my uncle also wanted to take a turn. He was denied also on countless amount of times due to his medical records. In 2011 he had contracted syphilis, a curable STD, and though he was cured for it already – he was still denied. After very thorough tests and observations he was finally given acceptance, which I found to be unfair that even though he was cured he still had such a hard time. But, this is America.