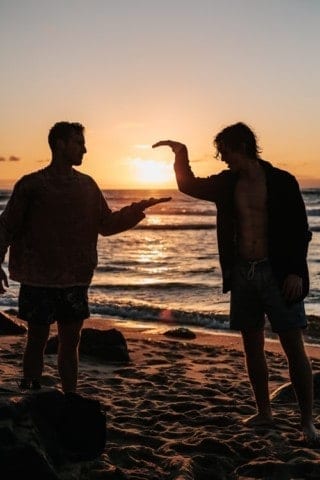 After the bell rang, the first period was over. A boy called Mr. Zeng (that’s me) decided to go to the bathroom after class is over. The hall was dirty because there was too much dust.

Suddenly, I saw a guy lying on the cold floor near the stairs and holding his stomach. His shirt looks dirty and his hair was very short.

I stood next to that guy and poked him,

“Are you alright? Stand up, let’s go to the office,” I said.

But his only response was, “Get off me!” as he continued lying on.

Then I walked directly to the bathroom. At lunchtime, I went to the classroom after I ate my lunch. I saw that guy again, the same guy from the morning who was laying on the floor.

I said, “Feel better now?” but he didn’t give me any response. He just walked toward me.

I swear his emotions look not friendly at all.

The next second, he tried throwing a punch at my face, but I blocked it with my hands.

“the fxxx!?” I yelled at him.
“Why did you attack me this morning!?” he yelled at me.  When I heard that, I knew he had definitely misunderstood me.

“What do you mean? I didn’t do anything to you and I was trying to help you in the morning!”

But he doesn’t hear any words, he just kept throwing punches at me and I’m kept defending myself.

“Stop! Listen to me, just give me a few seconds to explain this!” I screamed at him.

(punching like a machine), he didn’t give any response.

“Enough!” I yelled at him and pushed him to the door very hard. I tried to punch him but I stopped because both of us realized there was a person behind the door and he’s bleeding. A classmate had gotten hit by the door, because of the two of us were fighting.

A few moments later, The teacher has come

“Who did this?!” the teacher asked us.

“Him,” the victim said, pointing at the boy.

The victim didn’t point at me, probably because he didn’t see it or something. So the teacher punished him and called his parents. I kind of feel bad about this. A few days later, I saw him sitting on the stairs in front of the school building. so I walked toward him and sat next to him.

“Sorry about that day, I was trying to explain to you but you won’t listen to any words and you just kept punching,” I said “I swear I didn’t hurt you that morning it wasn’t me, I was trying to help you,” I explained to him.

“Really? have you told your teacher or parents yet?” I asked

“No, my parents are busy and the teacher doesn’t really care, maybe they (teachers) think we’re just playing games,” he answered.

Me and him talked until class began. We had a nice conversation.

After so many things happened between us, he became my friend in school. Yep, a few days before we were fighting but now we were friends. This story happened before we became best friends. The lying guy in this story turned out to be my best friend in China. Moral of the story: “Sometimes you start off on the wrong foot, Just be brave and admit your mistake. Like in my story, we become friends.”;D

I am confused with your story, Friends,” because I want to know why the boy was fighting with you. He was being bullied.

One sentence you wrote that stands out for me is: “ I didn’t do anything to you and I was trying to help you in the morning!” I think this is helpful because you help friends and don’t fight.

Your snapshot reminds me of something that happened to me. One time I see people they throw pen class room.

Thanks for your writing. I look forward to seeing what you write next because it is interesting.