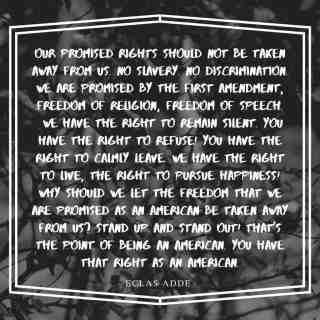 My 17 years of living I learned a lot. I have seen a lot. Read a lot. I take classes to be educated about my rights. I honestly see no point of it. Don’t let this nation trick you. They say as an American we have freedom and much more. Do we really though? Our nation values freedom, equality, etc so much but we don’t have freedom of speech. Our voices are not heard. Well they are heard but not acted on. We are not equal. Racism exits still in our nation. I see racism in my own city, in my own grocery stores. I seen racism all over the internet. Colored people are being killed. I see discrimination everywhere too, Just cause we are black, that means we are bad.  I seen slavery around me also. Being a slave just doesn’t mean being treated inhumanely, it also means not having the privilege to have the knowledge that we should.

Being black is stamped on my forehead. Being Muslim is also stamped on my forehead. As a young teen I walk around being mean mugged. Or treated unfairly. Just because I have that scarf around my hair and im black, i’m a bad person. I was at the grocery store just over the weekend. This white man decided to look at me awkwardly. Then he decided to push my cart on purpose. He seen that cart right in front of his eyes, he decided to push it, then start laughing after he seen me get angry. I witnessed myself and my family experience racism.