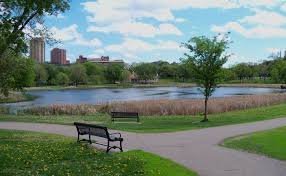 Why we should have more parks in Oakland

To begin, Parks are very important for Oakland, an article called “8 Reasons Why parks are Important” Cassandra, an architects, says, “It turns out parks are a crucial part of any community. They have a significant impact on the development of children and the happiness of everyone in the neighborhood”(Casandra). This is explaining that parks can help the community be closer and also can help children too. It’s also saying that the parks are very important for everyone so that kids have where to have fun and for the community to have a place to go so that they can have fun as a community and it would also help the obesity rates go down. Oakland should make new parks, making better parks and everywhere because parks and only in a certain area. Also, people should take care of the parks so that are nice and clean, the community should able to go to a park and play “pickup” games with anyone. Another example that proves that parks are important is an article named “Five ways to promote civic health through community design”  by Suzanne Nienaber who  works at the active design, writes, “Cultivate community pride through gardens and public art. ACES finds that public art and community gardens are associated with elevated civic engagement”(Suzanne Nienaber). The research found is if there are gardens and public art more people would be more engaged in the activities. That means if we have more parks that can do that would help everyone be together because now kids only want to be behind a screen all day. An example of a park like that is Diamond Park, that park has everything a tennis court everyone can play open space to do activity like soccer ect. It also has a basketball court Oakland citizens can play on, there is a swimming pool, people can play on the swing and go kicking there. We need to have more of that because people want to play and keep their mind out of problems they may have so the park is a way to get rid of that. If we have more parks like that around Oakland not only in some places it would be more easy for people and kids because kids can’t go to the park cause it’s far away so not everyone right now can enjoy Diamond Park. In an interview with a Life Academy student named Bryan Moreno who is a soccer player he also believe parks are important because they “ can keep kids distracted from the street and their mind distracted what they are dealing with”(Moreno). Like Bryan said, If we have more parks in Oakland that would mean that less people would be in the street and would be playing at the park.

We can bring the community closer by making more parks in Oakland, In a article named “Urban Parks as Community Places” by Mark Francis, a researcher at University of California, Davis was talking about the importance of parks for the community, Mark said, “An important way cities can use parks and open spaces is for community engagement. This is the process of working collaboratively with individuals and groups to improve their local environment. For parks and open spaces, community engagement allows public officials to directly involve their constituencies in the ongoing design, planning, and management of these resources. This process results in informed and engaged residents that feel better connected to their communities”(Francis). This quote is trying to say that we need a park so that they can be a public space for the people of the community. It’s also saying that people would feel better and connected to the communities. This is important because people think that parks are only to play or other activities, but parks can also build more community with the people around so they can feel more connected. Parks can teach about the Oakland culture because like Francis said it can build community and it can teach people from the community that don’t really know about Oakland and its culture, the parks is a way to teach or learn about the culture.

By making more parks in Oakland we can be more healthy as a community. Why parks are important for Oakland? Yareli Cruz a women that migrated from Mexico to U.S to have a better life for her family. She was asked why as a parent “why are parks are important for the community”? She said “ If there is less parks for kids to play on and parents want kids to be outside but where are they going to go because more and more kids are getting obese because there isn’t a park in Oakland to go”(Cruz). This is explaining a lot of things first of all it’s saying that how can a kid not use like a phone or technology if there isn’t a place to go to have fun and be healthy. This is very true because if someone wants to play and be healthy they can’t because it would be hard to find a park that is close and it has what someone needs. I think we should build more parks because not only it would help the community but also it would help kids with there being healthy.

Some way argue that parks don’t help the community because parks can bring the crime rate up and drugs because what happens at the parks. When people think about parks people say that people only go there to sell drugs or gangs hangout there. If people like that hang out there no one would go to the park because it’s not safe, it can make parents feel worried and not want their kids to go there.

This article about why parks are important , this source is credible because she is a architects and knows a lot of building and spacing.

I interviewed Yareli Cruz because she is an athlete and a person that lived in Oakland a long time about 14 years.

They are professional at what they do. They help cities find information about there cities and they don’t have ad on their website.

This source is credible because the author works at the University of Davis so he takes it serious on what he is doing. It’s talking about how we can bring the community closer by making more parks

I interviewed Bryan Moreno because he loves sports and wants to help the community get better.

Hey Victor! I really enjoyed reading your post! I can hear the passion in your voices as you bring in your perspective as well as your credible resources! Doing this makes your post very powerful and informative. Your post was also very engaging. I loved how you connect your issues to the community! Doing this made the post very personal to the reader (me!). I was able to connect with you right away! I encourage you to continue thinking about this issue. As a reader, it would help me if you elaborated on what you mean when you say “pickup” games in the park. What does this game entail? What does it look like? What does it feel like when you play in a park? Pulling these personal details into your post will allows your readers to stay connected and feel a since of comfort as they read. I also enjoyed that you discussed issues of obesity. Have you look up any statistics on the current obesity rates among students in K-12? As a reader, statistics can be very powerful and help get your message across. I hope to hear what you like about these suggestions or any additional research you have found in your studies!

Thank you so much for reading my blog. The part of your comment that stood out to me was you said oakland can help residents it can help me too. This impacted me because it shows that we really do need parks not only for us but for the community.

Victor,
I agree with your statement because after reading your blog I think parks aren’t a waste of time and they can actually help communities. One sentence you wrote that really stood out to me was “By making more parks in Oakland we can be more healthy as a community.” this had stood out to me because I never really thought about parks creating a healthy community. You choosing this topic brought a lot of relevance into parks that people treat badly or people think is only for little kids so I think it was a good topic to talk about. I think your blog was incredible try making some sentences shorter though. Thanks for writing and posting I look forward to seeing what you write next because you are an amazing writer:).
-Wendy

Thank you for reading my blog. The part of your comments that stood out to me is when said “You choosing this topic brought a lot of relevance into parks that people treat badly or people think is only for little kids so I think it was a good topic to talk about”. I agree with this because we need to talk about this more in our community and people need to know this.

One sentence you wrote that stands out for me is “It’s also saying that the parks are very important for everyone so that kids have where to have fun and for the community to have a place to go so that they can have fun as a community and it would also help the obesity rates go down.” I think that this quote’s meaning is strong because I see that you clearly explained that parks are really important to the community itself. An example of this is when you talked about connecting Parks and physical health and somewhat parks and moods. One thing that you can work on is fixing the order of your words, so it could be understandable and readable to the reader and I also recommend to make your sentences shorter.