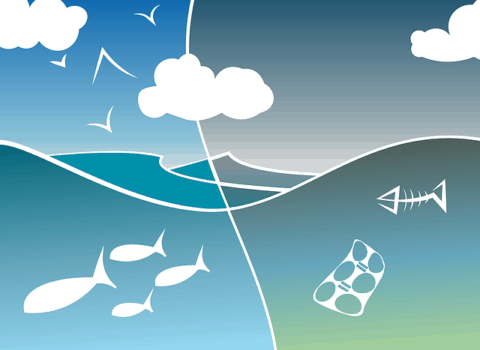 The Great Pacific Garbage Patch is one of five oceanic gyres, roughly circular current systems. These gyres are created by the influence of air and water temperatures, humidity, air pressure, and the landmasses in the ocean. The Pacific patch specifically is formed from the California, Central American, and North Equatorial current. These currents mix together the warm equatorial waters and the colder subarctic waters creating the gyre. Within the gyre is very few masses of land, allowing the floating matter to travel to the area of low energy within the gyre creating the Great Pacific Garbage Patch.

The patch is composed of around 90 percent polymers or plastics, generally items like plastic bottles or bags that people tend to throw out. It is estimated that out of the 10 million tons of plastic that goes into the ocean every year, one-quarter to one-third of that trash will make its way to the Pacific patch. This plastic will remain in the gyre as only degrades into smaller pieces of plastic instead of naturally decomposing.

Past the general concern of this mass of plastic twice the size of Texas floating in the ocean, the patch poses a great threat to marine organisms. Animals such as turtles and seabird will often eat the plastic causing absorption of toxins that can lead to biological blockage within the animal and eventual death. It is estimated that over 100,000 mammals and sea turtles die each year from ingesting plastic and the number for sea birds breaches one million. Specific trash such as discarded fish nets also pose threats to sea life as they are snared and unable to move. Below the surface scientists do not yet understand the effects of the nearly 70% sunken debris.

While avenues of cleanup are being tested and researched, many scientists believe that the only solution to the garbage vortex is the prevention of plastic and other debris from reaching the ocean. Even if this could become possible, the damage we have already caused will continue to create challenges for thousands of years. Thus, one of the most important ways to combat the issue is through education and further research into the scale and details of the patch as well as creating solutions to keep plastics and other materials out of our oceans.

Hi William. I agree, the garbage in our oceans is a huge problem and is a stain on our Earth. I wasn’t aware of the patch where this is all accumulating, and I think your description of the gyres make the reality set in. Preventative motions for the future are of course important, but I would be interested to hear about what scientists are envisioning to clean up the mess. You touched on it briefly, but I would really like to know our options. Overall, very good job.