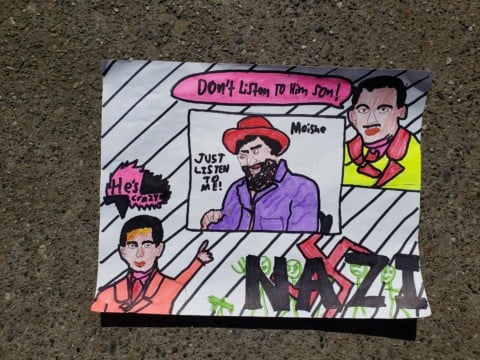 This portrait was created to honor the important life of Moishe, who survived two concentration camps (Dangerous labor camps) during the Holocaust while being the only one to survive out of his entire family.

He was brought to a disclosed location where Jews dug up their own graves only to be shot dead. Moishe miraculously lived while being wounded on his leg.

In the book Night by Elie Wiesel, the main character being Elie Weisel is talking about his life experience during WW2 and the Holocaust, Moishe talks about him being saved by God to warn others.

Moishe explained, “I have been saved miraculously. I managed to get back here… to warn you” (5). After surviving all of this terror he still had the encouragement to come back and help his community. Moishe was a Rabbi meaning a Jewish leader who was very religious and knew the Kabbalah language (Special Jewish language). Germans had just handed over the power to Hitler who created camps so Jews could not live with non-Jews, most formally known as the Holocaust.

Moishe’s mission was to come back to his home in Sighet Germany so he could warn his neighbor about his troubles. Nobody listened to him. In one part he talks about Moishe and how everyone thinks he is crazy. Moishe cries, “Jews, listen to me! That’s all I ask of you. No money. No pity. Just listen to me!” (7).

Everyone believed Moishe was crazy because the camps were hidden and unknown about. His life was near the end; he “No longer cared to live” and just wanted to warn others about the catastrophe that was about to happen.

Later on, Moishe was deported back to Poland for being in Sighet illegally. Soon the neighborhood got separated into “Ghettos” (Separate parts) by German Nazis, Gestapo’s (Secret police), and the Hungarian police. Everyone was taken to camps where they arrived at their last “vacation” in Auschwitz, Buna, and many more camps.

Moishe was an activist and upstander against the Nazis (Hitler’s supporters) and Gestapo (Secret police). Although no one listened to him, maybe they will listen to YOU!

The purpose of this memorial is to understand that no matter how crazy a story sounds or how crazy someone is, always listen because they might have a very important message that may even save your life one day.