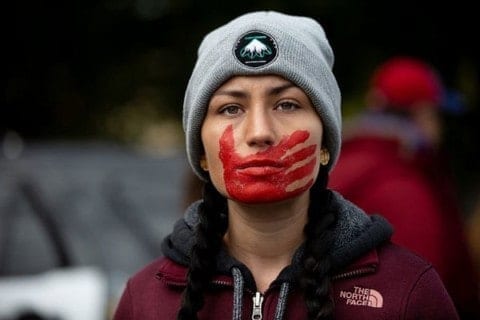 The many cases of missing and murdered Native American women is an extensive issue that is not being taken seriously by law enforcement, politicians, or FBI officials. The misconceptions that exist about this problem is allowing more and more women to go missing without any initiative being taken to find them. Therefore, states need to create a much more organized and focused plan to find these women as soon as a missing person report is filed.

A lack of jurisdiction is one of the main obstacles tribes face. The National Congress of American Indians (NCAI) released a five-year report on the effects of tribal governments enacting the Violence Against Women Reauthorization Act (VAWA), and also addressed the Special Domestic Violence Criminal Jurisdiction (SDVCJ). Before VAWA was enacted, for thirty years tribes did not have jurisdiction over any crimes committed by non-Indians on their reservations. The Senate Committee on Indian Affairs released a statement saying, “…a cycle of violence is perpetuated that allows, and even encourages, criminals to act with impunity in Tribal communities and denies Native women equality under the law by treating them differently than other women in the United States.” These Native American women are not receiving the justice that every citizen of the United States has a right to. This “maze” of criminal jurisdiction is complex mostly because out of the three governments, tribal, state, and federal, none of them have full jurisdiction of the criminal cases on reservations. If no one is able to take a case of a missing woman and completely follow through on it, how do we expect this problem to be solved? As law enforcement arrives at the scene of one of these crimes, they are supposed to decide who has jurisdiction over the case, “based on the race of the individuals involved in the crime, the type of crime committed, and the legal status of the land where the crime occurred” (NCAI). This decision shouldn’t be made difficult just because it is on tribal lands or because it involves someone of indigenous ancestry or background.

Continuing with the topic of jurisdiction, the Indian Law Resource Center released an article, “Ending Violence Against Native Women”, in which they say, “an unworkable, race-based criminal jurisdictional scheme created by the United States has limited the ability of Indian nations to protect Native women from violence and to provide them with meaningful remedies”. The jurisdictional process should not be seen as “unworkable” let alone “race-based” by any means. Legal decisions and judgments should not be affected by race under any circumstance. Even with limited data being provided, the Indian Law Resource Center reports that 4 in 5 American Indian and Alaska Native women have experienced violence, and more than 1 in 2 has experienced sexual violence. There are people who believe these violent acts are being committed against Native American women by men on the reservations of the same race. However, it is non-Indians, who commit 96% of violence against Native women and Indian nations were unable to prosecute non-Indians until recently (Indian Law Resource Center). This brings the argument back to the fact of jurisdictional complexities. If 96% of these assaults are being committed by non-Indians and it is happening on the reservation, not being able to prosecute these criminals enables a lack of justice for all of these women. Just because Native American men aren’t committing these crimes doesn’t mean we shouldn’t bother with the case at all.

Jurisdiction isn’t the only factor contributing to this problem, but also a repeated sense of carelessness shown by law enforcement in these cases. Abigail Echo-Hawk, an enrolled citizen of the Pawnee Nation of Oklahoma and the director of the Urban Indian Health Institute at the Seattle Indian Health Board addresses the lack of police reporting and tracking in an NPR article. The other journalist, Annita Lucchesi, is a descendant of the Cheyenne people and a doctoral intern at UIHI who researches public health issues among Native American populations across the nation. After asking 71 cities across the United States, nearly 60 percent of police departments did not respond to the request or they reported partial/compromised data. No matter the situation, every citizen of the United States should be able to rely on law enforcement to provide assistance and support. But as we can see here, more than half of the police departments contacted did not provide this assistance we expect. It is also crucial to point out that after searching media reports, they found more than 150 missing and murdered women that police did not even identify. That is 150 lives directly disregarded as if they mean nothing. Lucchesi stated, “It isn’t just a matter of jurisdiction — it’s a matter of racism” (Domonoske).

If law enforcement is being contacted about this issue and doesn’t put in the effort to respond, it’s not a fact of not being able to solve the case, but not caring enough to even try to solve it. Repeated acts of carelessness prove just how much effort the law enforcement is truly putting into these cases of missing and murdered Native American women. Lucy Anna Gray, Assistant Audience Editor and writer at The Independent, addresses the thousands of Native American females who disappeared in 2018 and questions the amount of justice being given. Audrey Huntley, a documentary-maker and a member of the victim rights team at Aboriginal Legal Services says, “It doesn’t matter if people know this is happening, they kill us anyway.” Once again, if law enforcement are the ones we are supposed to be able to confide in, why don’t Native Americans feel this way? They truly are losing hope they may have had in terms of getting help from a law enforcement agency of any sort. Some very prominent proof of this sense of carelessness is Danielle Ewnin and her sister. Ewnin spoke at a national inquiry held in Canada. Her sister Eleanor was found dead about 30 years ago, and Ewnin says, “We have recently found out that my sister’s police coroner report was filed under a different name. Their mandate of ‘finding the truth, honouring the truth’ failed our family and my sister miserably” (Gray).

There may be law enforcement or FBI officials who feel their efforts are being put forth to solve this issue. For example, Robert Johnson, Assistant Director of Criminal Investigative division of the Federal Bureau of Investigation, was facing similar questioning as Addington did (mentioned above). He states that “Our program includes more than 140 special agents, 40 victim specialists, and 36 field offices. In fact, 33 percent of the FBI’s victim specialist and over 50 percent of the FBI’s child and adolescent forensic interviewers work directly with victims and families in Indian Country.” In Johnson’s statement given on December 12, 2018, he says, “…the FBI remains committed to resolving crime in Indian Country and works closely with our partners to ensure cases are adjudicated fully through the court system” (Johnson). Through these quotes, we can see he clearly believes their efforts are substantial and they are doing what they can for these women and their families. He also states they are additionally trained to deal with crimes in Indian Country when they occur.

However, there are views and statistics to combat these statements. Talk doesn’t equal action, and law enforcement discussing how they put these efforts forward isn’t saving these women’s lives. Senator Heidi Heitkamp, N-N.D., addressed Robert Johnson in this hearing placing the blame on them saying, “You talk a big story, but it doesn’t match what actually happens on the ground.” In other words, we can’t have law enforcement officials who are just going to discuss the problem and not take action to solve it. Heitkamp also addressed the fact that FBI agents in North Dakota are, “stretched too thin” working 100-hour weeks. According to the National Institute of Justice, around 140 FBI agents work in Indian Country which pans out to be about 14 agents per one thousand people (Inbody). The crucial thing to think about here is how are these agents or law enforcement supposed to be able to efficiently help these women if there aren’t enough of them working in Indian Country, let alone having too much to do to not have time to help them. If law enforcement are simply “stretched too thin” to find missing women before they get killed, something needs to change. Johnson’s belief in being “committed” to these women is coming across as a sense of carelessness instead.

These women’s lives are not being valued bylaw enforcement that should be looking out for them. Repetitive acts of carelessness show that the effort needed to protect Native American women is not being put forth whatsoever. Law enforcement must be motivated and willing to help these women and their families. Instead of just discussing the problem, they need to take action and create a more efficient way to report and track these cases. In order for this problem to have a consistent solution, jurisdiction on tribal lands needs to be much more efficient and organized. Revisions of the jurisdictional system must be made soon. If neither tribal, state, nor federal governments have full jurisdiction to handle these cases, no justice will ever be seen on tribal lands.

Thank you for covering this topic as it is underreported. I knew about this issue, but after reading your article, I understand more about what is going on and why.