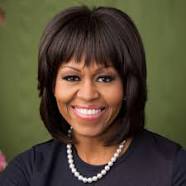 Michelle LaVaughn Robinson Obama is an African-American who was born on January 17, 1964. Her hometown is Chicago Illinois. Who is she? She is the first black first lady! (Yeah, the phrase sounds weird.) but that’s not her main job. She is a lawyer and a writer. And add to that she runs multiple campaigns and cares about our country and DOES SOMETHING ABOUT IT!

Dear Donovan, I really liked your writing because you talk about a very important lady who defends and helps people, and helps children to have a better education, that is very important for our country.
.

Very well written. I love the phrase with the word “first” twice! She had such a huge impact on the country like her husband. They also impressed a lot of people except Trump, who is so racist. It’s also impressive that she helped kids education. Nice job 🙂

Obama did great things for this country. Trump’s family as you said don’t think that. Good work dono, clap and a half to you.