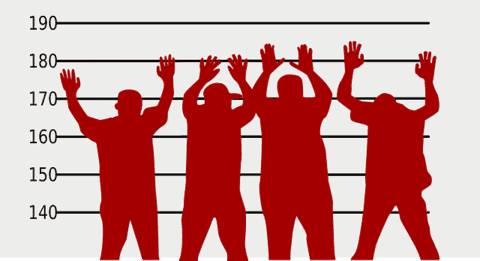 Based on the evidence, men of color are targets for police which is the main problem that is happening on the U.S, which have led to many protests and also to many violent acts by people.

Men of Color are targets and that’s a US Problem. This number comes from The Guardian’s police killings database and it counts “1,096 people who have died at the hands of police so far this year. The Washington Post reports that 908 people have been shot and killed by cops” (Calacal). By my research it says that police cannot use deadly force unless the attacker is armed which many cases of police brutality have been with unarmed people.

How has police acts led to protests that get violent ? This is some evidence of one of the multiple cases showed someone who was not armed who died. The New York Times is a source that multiple people see and it is a newspaper which makes it credible. They point out the case of Michael Brown who is “an unarmed black teenager, was shot and killed on Aug. 9, 2014, by Darren Wilson, a white police officer, in Ferguson, Mo., a suburb of St. Louis. The shooting prompted protests that roiled the area for weeks. On Nov. 24, the St. Louis County prosecutor announced that a grand jury decided not to indict Mr. Wilson. The announcement set off another wave of protests. In March, the Justice Department called on Ferguson to overhaul its criminal justice system, declaring that the city had engaged in constitutional violations” (The New York Times). This piece of evidence shows that Michael Brown was an unarmed man who was shot by a police officer. This shows that killing a man of color leads to protests because the police officer shot him without reason. Some say police are only trying to do their jobs. From the news, the police officers say they do not use violent force until they don’t have any other choice. But they are still targeting people because the arrest rates and the many victims of police brutality have been men of color.

In conclusion police brutality  targeted men of color which have caused  1,096 people who have died at the hands of police and I will leave you with a question do you think this is what people want to think about police the ones that are supposed to protect us? Why?

Dear Jonathan,
I agree with your research 100 percent, unfortunately people of color have been targets of police brutality, and not only have African American suffer this, also Latinos. I have seen on the news that this is becoming a problem, I remember seeing not long ago about a professor who the police though he had stolen his own vehicle. It turns out he didn’t and not only one but a few police officers showed up and tackled him as if he had committed a crime. African Americans and Latinos have been targets by law enforcement but that also doesn’t mean that all police officers are mean or that they want to harm others. There are many police officers who do an excellent job, who are very patient and are considerate of others. I know that it is hard to trust when we have seen so many negative news about law enforcement but trust me, there are many good police officers who care about protecting all the people regardless of their skin color. It’s sad to see how many people have died so far due to police brutality but hopefully that number will not rise. Very interesting post, I like the fact that you have some statistics, which shows that you search deeply into the topic. It is very interesting to see that there is someone willing to talk about this issue.

Dear Jonathan,
One sentence you wrote that stands out for me is “Men of color are targets for police which is the main problem that is happening on the U.S, which have led to many protests and also to many violent acts by people think this is”. I think this is outrageous because it’s mostly blacks and latinos that are being targeted you rarely hear about a white person been harassed about the police the people of America need to wake up and realize that this is a social problem and the people who are being harassed by the police end up dead like Oscar Grant and Trayvon Martin. The police should be there to protect us not beat and abuse on use color people.

I am very happy with your post because
One thing you said that stands out for me is: “police brutality targeted men of color which have caused 1,096 people who have died at the hands of police.” I think this is sad, because it’s not fair for color people getting killed by the law which is the police.Also for no reason or something that they’re getting blamed on but it’s not them.
Your post reminds me of something that happened to me. One time i was watching a movie named fruitvale bart station.This movie was about a black male name oscar grant getting murdered by a white police.He killed him for no reason and he only serve little time in jail.
Thanks for your project. I look forward to seeing what you write next, because it was very good reading what you wrote and you might stop this problem in the future when you get old.

You’re writing is really strong, and I also agree with what you’re saying. This is a big issue because it’s been going on since the 1950’s and it hasn’t stopped! I actually studied this and I found out that the police killed a 12 year old boy named Tamir Rice. He was playing in the park with an unloaded orange-tipped BB gun. Someone called the police worried someone would get shot with a BB and did say it was a toy gun. The police finally showed up and gunned the boy down leaving millions worried for their lives being threatened by the police.

Dear Johnathan,
I am interested in this post curious about these question. Why is this a big idea to you? Is there more that you care about? I understand this is a issue for the U.S.A but why to you? What are you gonna do to try to make this stop?

i agree but don’t you think that compared to all the other people of all genders are getting targeted a lot more often so maybe we could include them but also exemplify that we are also fighting for women’s rights.

I really like your writing and I think this is an important issue. I encourage you to look at all genders of color and not solely men of color because they are not the only ones threatened. http://www.aapf.org/sayhername/ This is a link to a growing campaign called Say Her Name. Its aim is to show the amount of women of color that are killed and endangered by police because it is never covered in the media. It’s something that I’ve never thought about until I saw this campaign.