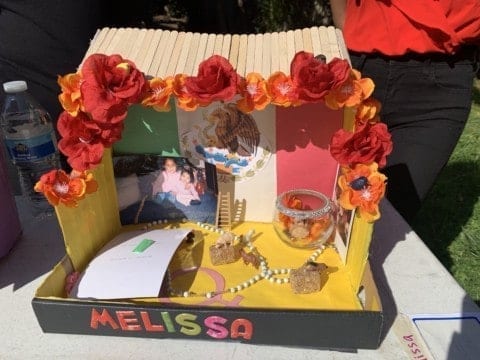 This shadow box represents my identity and what I want to show others. The inside of my box are my counter narratives, the items  that choose to represent myself as. In this box I added a venus symbol, pictures, a rosary, animals, a miniature ladder and a flag. The venus symbol is my assigned identity and it represents my sex which is female and I am proud to be a female because females are strong, hardworking people. My pictures represent my family and who I am close with. The picture on the far left is my cousin and I celebrating our 3/4 birthday.In the middle, is my sister and I, I decided to include this picture because we are close and she has helped me through a lot and taught me important lessons that have helped me in my life. The picture on the right shows when I was getting baptised. I also added a rosary because it represents my Catholic religion and it connects to the picture of my baptism. Being Catholic is a chosen identity because I could have chosen to not follow Catholicism but I did and I’m happy that I made such a big decision. I decided to add the animals because back in mexico my family had a plethora of animals and I really like animals so that represents a part of me. An assigned identity that I added was the Mexican flag because I am proud of where I am from and I also added the ladder next to the Mexican flag as a metaphor that I am a Chicana whose parents are immigrants and who will reach her dreams and be successful.

Hello Melissa, I am a college student at SJSU and I just wanted to say your shadow box was really neat and I really enjoyed how proud you are of your heritage. I myself my family is from Mexico and I love embracing my heritage as well. It is very vibrant and I love the effort you have in the flowers. The rosery was also a wonderful touch and made it very heartfelt to see your connection to God and your religion.

Dear Mellisa,
I am very proud of your shadow box because you are representing your true self. Also I really liked the colors and designs you have on and in your box. Additionally on the letter you wrote was really inspiring and how you show who you really are and you arn’t afraid to show it. One thing that stood out to me from your letter was that you said “I could have chosen to not follow Catholicism but I did and I’m happy that I made such a big decision. ” and I’m happy that your happy your religion. Another thing that stood to me from your shadow box is the yellow paper inside your shadow box, and why did you choose yellow?

I am surprised on your work of art “melissa luis shadow box because of the way it looks, and the design of the sides. Also the pictures you added on it . One part that stood out to me was when you wrote your name at the bottom because it’s something i never realized and it unique.