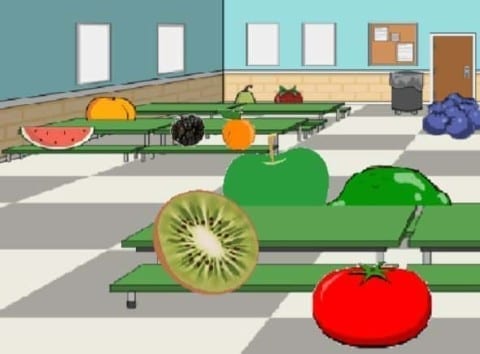 I made a scratch animation called Rotten Fruit. . It is a Mean Girls parody, but all the characters are fruit. Cady is a Tomato, Regina is a Green Apple, Karen is a Lime, Gretchen is a Kiwi, Damian is an Orange, Janis is a Blackberry and Aaron is a Coconut. I knew I wanted to do a Mean Girls parody but I wanted to make it my own, while keeping some classic scenes and not getting sued for copyright infringement. All the characters have similar personalities to the original Mean Girls characters. For example, Lime thinks she is a Lemon that is overripe. Many Mean Girls quotes are also incorporated into the animation. For example, “on wednesdays we wear green.” This is because all the plastics, or in this case the metals, are all green fruit and the animation takes place on a wednesday. Although many aspects are similar, the plot is slightly less complicated and more straightforward. After all, the animation can’t be an hour and a half long. The beginning is the same. Tomato comes to class on her first day of school, she meets Orange and Blackberry and they explain to her who the Metals are and how to deal with high school. Then Tomato is walking in the cafeteria and the Metals start talking to her. They accept her into their group and tell her all the rules that come along with sitting with them. Later Tomato is in class mooning over Coconut and decides the only way to be able to talk to him is to act stupid. Coconut invites her to a party and she is very excited. At the party Green Apple tells Coconut all this bad stuff about Tomato. However, Orange and Blackberry overhear and tells Tomato to meet them at the school so they can talk in privacy. Orange and Blackberry tell Tomato what they overheard and Tomato is furious. She confronts Green Apple and tells her the only way that she can be forgiven is if she tells Coconut all the stuff she said about Tomato wasn’t true. Green Apple does that and Tomato hugs her. Tomato has a moment of reminiscence and says that they had their fair share of fights during the rest of the school year. Tomato tells of one of the sabotages she does to Green Apple during the rest of the year. These are the sabotages she does during the movie.
Making the actual animation was harder than writing it. Writing the animation mostly consisted of taking Mean Girl ideas, putting a little spin on it and making sure it was compact. To help with how the animation was supposed to look, I used storyboardthat.com to make storyboards about how the animation would look. They were pretty straight forward and I had fun using different fruit as background characters. I decided to use some characters and backgrounds from storyboardthat.com for my scratch animation. I screenshotted the backgrounds and uploaded them to Scratch. I did the same with the characters, only difference is I also deleted the backgrounds so the characters would be able to move anywhere without a big screen behind them. Coding was fairly simple, I used the broadcast button several times. I went to the broadcast closest to the section I was working on, removed it from the main code and then started playing the animation from there, just to see that everything was running smoothly. I ran into several problems but putting all the coding side by side helped with that. You can watch this now at https://scratch.mit.edu/projects/215319398/#player. https://docs.google.com/document/d/1spuoPwtK77HO1d6AYynKZ1s_DaVo0m6t_K_9AumFRX0/edit?usp=sharing