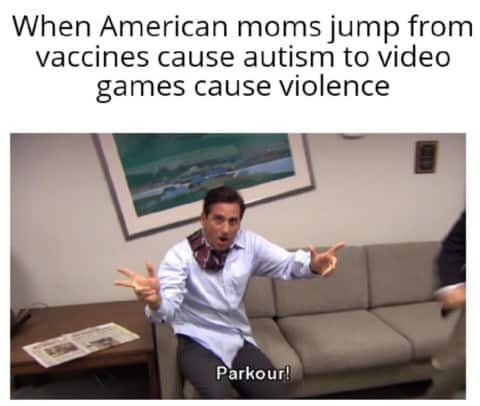 Just about everyone loves videogames.  They’re enjoyable, good time killers, and a way to make great memories with one’s friends.  Video games are fun, especially violent ones, but do kids that grow up playing these games have violent lives when they are younger?  This argument has been discussed for years, especially now that mass shootings have been more prevalent in our lives than ever. Many people think mass shootings are directly related to violence in video games but this is not true.

In 2015, the American Psychiatric Association (APA) published a study about violent video games’ relationship with violence.  Psychology Today wrote an in-depth article analyzing the research conducted by the APA.  “Playing violent video games leads to more aggressive moods and behaviors and detracts from the feelings of empathy and sensitivity to aggression,” wrote the APA.  The APA is saying that videogames lead to dullness of feelings, making us less sensitive and more aggressive but that would lead to more violent crimes related to these games but there has been no evidence of this fact.  Because of this, there is no connection between gaming and poor behavior.

After the mass shooting in El Paso, Donald Trump called for, “the end of the “glorification” of violence in “gruesome and grisly” video game culture.”  He is blaming video games for the shooting. CBS News interviews James Ivory, the research director at Virginia Tech.  In the article, Ivory states, “The public doesn’t always blame crime on video games — but they are eight times more likely to do so when the perpetrator of a crime is white […]white people don’t play video games more than people of color […] therefore, pulling video games into conversations about white criminals may be using the games as a baseless excuse.” Looking at the data, there is no true correlation between violent videogames and violent crimes.

I like the way your article flowed from one topic/citation to the next. This is a topic that is widely joked about by kids of our generation, however I think your well written article makes quite a few good points on something that is rarely spoken about from our generation. Your use of citations contradicting your argument was intriguing and helped you strongly validate your argument.

This is a pretty solid argument, especially the part where you said “…therefore, pulling video games into conversations about white criminals may be using the games as a baseless excuse”. It reminds me of when people blamed the Columbine Shooting on Eminem.