Me, Myself and I

Home Me, Myself and I 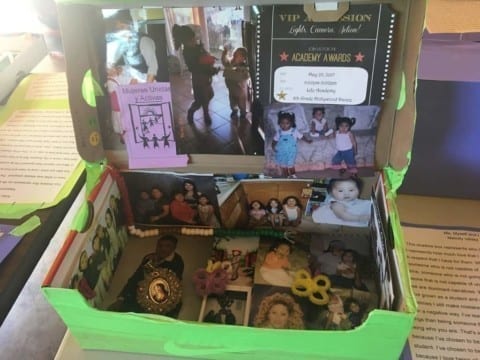 This shadow box represents who I am and who I choose to be. It represents how much love that I have for my family and how much respect that I have for them. When people look at me,  they see someone who is not capable of making the right decisions all the time, someone who is not going to keep getting educated, and someone that is not capable of understanding what hard work is. Those are dominant narratives. When I look at myself, I know how far I’ve grown as a student and a family member even though sometimes I still make mistakes that aren’t the best and impact me in a negative way. I’ve learned that there are more valuable things than being someone that people want you to be instead of being who you are. That’s where my chosen identity comes in because I’ve chosen to be a good daughter and sister also a student. I’ve chosen to be proud of my heritage, Mexican, because I love being all of that, that makes me who I am. On the other hand, my assigned identities I can’t choose. This is a counter narrative of my story of being a young Latina who grew up in a big family without her father. All of this impacted me in a good and bad way because as you all know a girl needs her father and growing up in a big family everyone needs attention but not everyone gets it all the time which can be very heartbreaking I should know i’ve been in that position. Growing up as a young Latina I grew up hearing and seeing people being deported and being stabbed in the back or being afraid to live their life because they would be sent back. Even though I was born in the United States I have family who weren’t and had to suffer through  a lot of pain to come here  so that they could have a better life for themselves and their children  that was heartbreaking and sadly it still is. I have chosen to share those topics of myself because I just want people to know that I’m not the only one with a story of being a Latina whose nationality is from U.S.A but my ethnicity is Mexican.  My family is all I have and I go to school to better myself and make them proud to show them that fear isn’t a person it’s a feeling and feelings go away and that they were brave once and I know that they can be brave again. 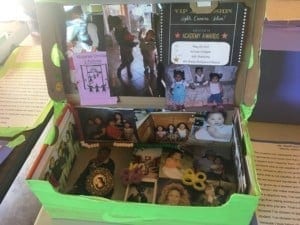 Dear, Melody I’m a student from Life academy I really like how you explain your shadow box because it has a lot of details about you and your family and I feel that really important in everyones life.

Dear, Melody I like how you have very nice transitions and how your artist statement isn’t very linear so it’s creative way of explaining your identities.

Hi this is Julio from Fremont High School. I saw your shadowbox and looks amazing and I like how you make it, I like that you put all that pictures of your family and of yourself. Good work!

Hi this is Jorge from Fremont HIgh School. I have noticed that your shadow box looks amazing and I like how you put tons of pictures of family because that’s important. Keep up the good work.

Dear Melody,
I really like your box and your counter narrative about your box. I agree with you that family is everything to you. I also agree with you about growing up without your father and I can relate to you about that since my father left me when I was younger. Other things I agree with you is about being a student and also about Latina.

Dear, Melody I really like your box because it’s really creative. I agree with you that family is everything and I much love you have for your family. Also we both Latina ayy lit.