Me In A Box

Home Me In A Box 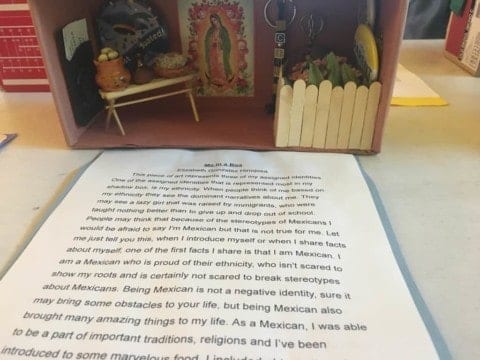 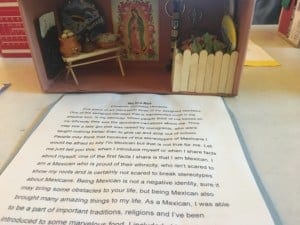 This piece of art represents three of my assigned identities. One of the assigned identities that is represented most in my shadow box, is my ethnicity. When people think of me based on my ethnicity they see the dominant narratives about me. They may see a lazy girl that was raised by immigrants, who were taught nothing better than to give up and drop out of school. People may think that because of the stereotypes of Mexicans I would be afraid to say I’m Mexican but that is not true for me. Let me just tell you this, when I introduce myself or when I share facts about myself, one of the first facts I share is that I am Mexican. I am a Mexican who is proud of their ethnicity, who isn’t scared to show my roots and is certainly not scared to break stereotypes about Mexicans. Being Mexican is not a negative identity, sure it may bring some obstacles to your life, but being Mexican also brought many amazing things to my life. As a Mexican, I was able to be a part of important traditions, religions and I’ve been introduced to some marvelous food. I included objects that show the counter narratives about my ethnicity, for example I showed an image of La Virgen De Guadalupe, the pot of beans, and the bowl of rice to show some positivities that my ethnicity has brought to my life. I also included objects to represent my second chosen and assigned identity which is a my sex and gender. Being assigned a female at birth has also brought negativity and positivity into my life. Because of my sex and gender people assume that I am weak, that I am very girly, or that I will only grow up to be depended on a male and not continue with my education. The pins in my box represent how I like my older sisters have been able to continue with our education no matter what obstacles we have faced. The pins and UCLA Grupo Folclorico also show how my parents who are immigrants were able to raise all five of their daughters and have helped us get to where we are now in life. My last assigned identity that I chose to show in my shadow box is that I am the youngest out of five sisters. The object I chose to include in my box to represent my last identity is the Sonoma State University little pocket. This object represents a part of me being the youngest out of five sisters because as the youngest sister I am told to be like my sisters, so I am to join the programs they do and one of the programs that all five of us have done is named Tech Trek and it took place in Sonoma State University. This shadow box represents three different aspects of my identity that I am proud of.

My name is Maria, I am a student from life academy. Your shadow box is really pretty and like the fact that when you look at it you could tell your culture and that you want to go to college and have a good life because i could connect to you. Something I feel you should add will be is the background of your shadow box like the stereotypes. But after all i like hoe you but alot of explanation on your hand writing.

Dear Elizabeth, I like how you put half of your whole artist’s statement with your ethnicity. I also adore that when you were talking about ethnicity stereotypes, you put that you as an individual aren’t those but others might be which makes it so you don’t sound so preachy about it. I also think that putting Sonoma State University little pocket as an object is neato because it’s sounds unrelated to you being part of 5 sisters but you make it be related in good fashion.

Thank you for sharing your work. My name is Tania and I am a student at Fremont High School.
Something I liked about your work was how your shadow box looks so creative and your paragraph.
Something I have a question about is how hard did you work on this. Please feel free to comment on my work in the future. The address of my student blog is http://taniarfhs2021.edubolgs.org/
Thank You!

Dear Elizabeth,
Thank You for sharing your work. My name is Marcel and I am a student at Fremont High School. Something I liked about your work was the things you put inside of your shadowbox. Something I have a question about is how does the outside of your shadowbox look? Please feel free to comment on my work in the future. The address of my student blog is http://marcelgfhs2021.edublogs.org/ THANK YOU !

Hi, Elizabeth and i really love your shadowbox. I liked the way you said that your proud of being a mexican. Your shadowbox had inspired me to look out of my own brothers like your sister´s are leading you to a right direction

Amazing shadow box post, it is great to see young people talk about their ethnicity and culture. One of the reasons why I really liked this shadow box was because as a latina I feel identified with this publication, I know what it feels to be marginalized, again good job I like the variety of objects you included.To further your thinking here are some questions I would like to ask you, do you think there are good stereotypes? Who do you think benefits from stereotyping people? Do you think the media perpetuates stereotypes?

Elizabeth, you’re article about your shadow box is so inspiring. I think it’s so incredible that you embrace your ethnicity in this way. You should be proud of your heritage and where you came from because that is who you are. You deserve respect from those around you. I think it’s awesome you are standing up to the stereotypes you have faced growing up as a Mexican girl. I hope you and your sisters continue to embrace your beauty and intelligence by defying these stereotypes. You deserve the world and all it has to offer. Thank you for sharing this story and showing others that they can stand up and truly be proud of who they are!!