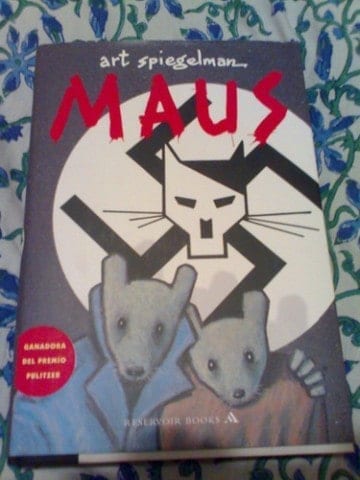 MAUS II part 3 by “art spiegelman” The next morning, Vladek announces plans for a trip to the supermarket, to return foods Mala left behind and buy groceries for the week. When Artie reminds Vladek that he and Francoise are only planning to stay for another day or so, Vladek grumbles that it would have been better for them not to come at all, if they were going to leave so soon. He tries to force Artie and Francoise to eat the sugary cereal and cake Mala left, which he can’t have because of his diabetes. After his experience in the camps, Vladek says, he hates to waste any food at all, and he does not relent when Artie and Francoise tell him they do not want the food. Finally, Artie gets frustrated and snaps at him, telling him to save the cereal “in case Hitler ever comes back.” This shows how he got frustrated and remained his dad about the past.