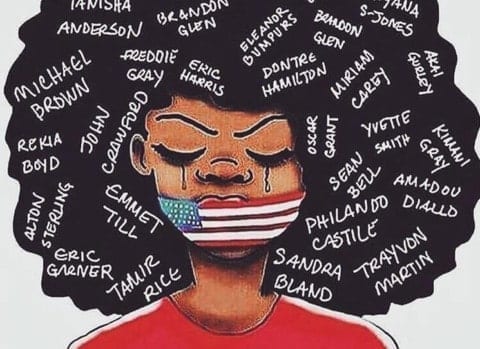 Martin Lurther King Jr once said, “I have a dream that one day little black boys and girls will be holding hands with little white boys and girls.” He was a great man who worked tremendously to bring greater equality to America and ensure civil rights for all people. He wasn’t afraid to speak the truth, advocated for those who couldn’t, and truly believed in the ability of humankind to live in peace. However, society has not acknowledged or held on King’s dream of ensuring civil rights for all people regardless of race.

Every time a white police officer sees a black man, they feel the tendency to shoot and kill, not to disarm. MLK advocated for people of every race to live in unity and not violence. However, in today’s world, blacks are being shot left and right as there was something wrong with being black when really, being black is an honor. Unfortunately, some people don’t see it that way because they see race first and not the individual. Police brutality has become such a significant issue in America as more and more people are being killed for merely being the race they are. According to Buzzfeed reporter Nashrulla, some people have heard about the Botham Jean Murder Verdict case that took the life of an innocent man. Not because he was violent, not because he was armed, and not because he was guilty, but because he was black. Alone, that shows how much Americans have devalued human lives. To take it a step further, “Black males aged 15-34 were nine times more likely than other Americans to be killed by law enforcement officers last year, according to data collected for The Counted”. When most black people are killed, the news doesn’t show the human being behind the act, but instead, includes whether or not they had a criminal background or try to justify what they did in their past to make it seem like what they did now, make them deserve it. All MLK wanted was for our society to not be prejudice, but be open-minded, to not discriminate, but see each individual as who they are, and not be hatred towards one another, but learn about our differences to understand one another.

Americans tend to view police brutality on the news and see it as another black and white picture of a black man getting shot as if it is what is expected. On the other hand, if it was a white person, it would’ve been seen as something more devastating and tragic because it’s not as expected. When one happens, Americans become more and more complacent about the situations because they know another one is going to happen. In the book Dear Martin by Nic Stone, Justyce said, ” ‘yeah, there are no more colored water fountains, and it’s supposed to be illegal to discriminate, but if I can be forced to sit on the concrete in too-tight cuffs when I’ve done nothing wrong, it’s clear there’s an issue'” (Stone, 12). Justyce, the main character in the book, writes to Martin Luther King about what happened to him when he was trying to help his white friend when she was drunk. As he was walking, the police saw him as threatening because he was wearing a hoodie and brutally handcuffed him and shoved him against his car without question. How can African Americans show that they are defenseless if police officers are already threatened by the color of their skin?

Why can’t the same compassion that’s given to a white person be given to a black person despite what happened to them? Americans need to understand the compassion in each of the police brutality and acknowledge that that could’ve been them instead of seeing as “another story.” The conversation has to stem in America because even though it’s uncomfortable to talk about, Martin Luther King didn’t simply die so we could repeat another form of racial inequality in America. King said he dreams of a day that “little black boys and girls will be holding hands with little white boys and girls.” However, it seems at the moment that white police officers value the use of their unnecessary arm gun more than the life of a black person. As Martin Luther King said, “I have a dream that my four little children will one day live in a nation where they will not be judged by the color of their skin, but by the content of their character.” Unfortunately, the dream doesn’t seem real at this moment because we as a society are so focused on our differences we don’t realize that our differences are what make us stronger.

Some Americans may argue that police brutality isn’t something that needs to be talked about because police officers are just doing their job and protecting themselves, however little do they know the effects it takes on a person for losing each individual and nor can they understand the importance of not being afraid of walking or running outside because of the fear of being shot. In today’s society, it is seen that white people are seen as being privileged and that’s true compared to African Americans. In the last episode of the show A Million Little Thing when two white couples see a black man filming the daughter of his friend playing softball. Unfortunately, they directly assume his intentions are bad and decide to say, “you don’t belong here” because the first thing he saw was his race. MLK tried to emphasize the message that our race doesn’t make us different from one another, it’s our characteristics, our actions, our personality, our identity that differ and race should be the very last thing because believe it or not, everyone in the world is part of the human race.

Being a true American in America is being able to acknowledge the differences that you have but also work to better the nation, not only for the country but for every individual living in it as Martin Luther King did. The second amendment, known as the right to bear arms, was put in place to protect us, but it seems we are protecting the second amendment more than human life itself. We as Americans have to find a way to protect human lives but at the same time, not neglect our second amendment because if we don’t, this country will eventually crumble to pieces, and we will never be able to look at America as the great country it once was.

I think your outlook on police brutality against African Americans is enlightening. As you said, a lot of people have heard about situations where someone was shot just because of their race, but they don’t think about the reasoning behind what causes police to pull the trigger. Is it due to their race or did they do or say something that the police felt threatened by? And yes, while I agree with you on the idea that American is not living up to its standards of equality as introduced by founding documents including the Declaration of Independence and the Constitution of America, it could also be that the law enforcement officers are frightened because they feel threatened. I don’t think it’s a reasonable excuse to say that they pulled the triggered on someone (that’s not white) because they felt “threatened”. These stereotypes of people of different color and race are one of the factors that contribute to the police brutality. I think you did a great job of introducing and explaining this topic, and I would love to hear about your perspective on the other side of the argument. I found two articles and thought that it might be interesting for you to read 🙂