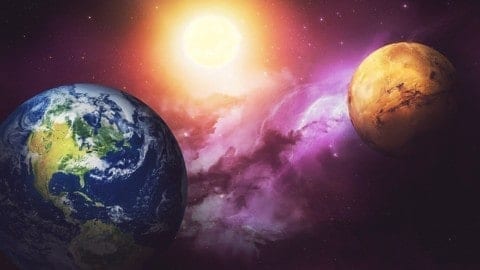 This Mars mission that will take place in the 2030’s is in fact a sign that life on Earth is coming to an end. No one can predict when this catastrophic will happen, or what will even happen. It could happen tomorrow with a nuclear war breaking out, or in a million years because of global warming, or 5 billion years when the sun turns into a supernova. With population rapidly increasing, and about 50% of the world’s land and sea expected to be inhabitant by humans. Scientists are in a hurry to get the human population on the red planet. Not only that, but with the doomsday clock being the closest it has ever been to midnight due to our current president of these United States. Scientists are predicting and are worried that a nuclear war is coming in the near future. Scientist and even politicians are hard at work. While scientists are working on unmanned missions to collect date for the big mission to colonization the planet. Both Democrats and Republicans are working on a bipartisan bill for NASA to establish a colony on Mars. It is the one issue actually uniting the two parties for once. Finally, this mission will not just help to colonize Mars but also could help with the colonization of the other planets in the future. Who knows maybe we could be living like they do in Futurama; where instead of being from a particular country, you are from a particular planet.

Samuel, I agree with your vision of a new world for humans. Because of high tensions between powerful nations and all of the polluting that humans have done, we will simply kill the Earth itself. One wrong political move, and the need for a new planet will be indefinite. I am glad to hear that there has been bipartisan cooperation on this issue, which hopefully will result in positive results.

Sam, this is super interesting and I had no clue that all of those reason you listed are why mars is being looked at for a new home. I can tell you are passionate about this subject and you did a good job of describing what research you did. Good job.