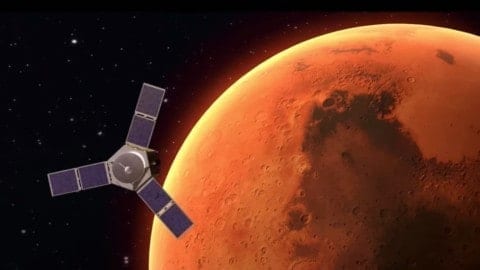 As we received the information of the surface of the “red planet’s” environment and weather thanks to our best fallen rovers. The next step of the mission is to send another rover to find not just rocks, but rocks that have microbial life itself. The Mars 2020 rover introduces a drill that can collect core samples of the most promising rocks and soils and set them aside in a “cache” on the surface of mars. Which means that rocks that can be found with life on them give the idea that is possible to in there. That the mission also provides opportunities to gather knowledge and demonstrate technologies that address the challenges of future human expeditions. These include testing a method for producing oxygen from the Martian atmosphere, identifying other resources (such as subsurface water), improving landing techniques, and characterizing weather, dust, and other potential environmental conditions that could affect future astronauts living and working on Mars.

Which brings us to the next step (if shows a complete success the 2020 one) and that’s launching the first people to live on the planet. The people that have been training for this are from the Mars Desert Research Station in the Utah desert. The station was established by the Mars Society in 2001 to better educate researchers, students and the general public about how humans can survive the Red Planet. The reason they added the simulation in Utah’s desert, is that the place can mostly resemble the environment of the planet. Because Mars temperature gets hot during the day and cold during the night in some areas, that’s why they located at Utah because it gets mostly hot just like the areas. The numbers of crews that are training for living on Mars are 200 people of six-person team that are to live in 1-2 weeks field visits at MDRS while inside “spacesuits”.

With this simulation it makes the people to become more flexible in the environment that they are going to be experiencing on Mars. From this simulation the people that are there, are being trained for not just to be okay with their surroundings, but of what they need to do for a living on the Red Planet. What they need to do is to maintain the stations systems which is to make sure that it is okay, grow plants in a GreenHab to support themselves, and recycle their waste of water. With these types of activities the people that are there will be ready for any situation that they might encounter when they are ready for the travel. The activities at MDRS are not only about informing the public, but also to carry out real research to bring the people much closer to the reality of human exploration on the Planet.

I very much enjoyed the nature of your article. Space travel and terraforming is one of my biggest interests. It was great to see someone who shared that same passion. The factual information you brought to the table was very intriguing. Great work overall, I enjoyed it. We will all be looking forward to the 2020 mission to Mars. For more info please check out the link below.

This is a well done article though I think it could use a couple more sources to provide a way for people to read about it more in depth. Cora even commented a link to the website. It’s a bit strange how close the river launch is, being that it’s scheduled for next year. It’s a current and interesting topic and I like how you wrote about the different aspects of it. I’d like to hear your opinion, though. Do you think it’s a good idea that we’re trying to live on Mars? Do you find it exciting? How about you, comment section?

Hi Cesar,
Your post was very interesting to read. I think it is awesome that people are preparing to attempt to live on Mars. Ever since I was little I have been interested in space travel. The television series, Star Trek, and the Star Wars saga have always been a big part of my life. It is awesome this is becoming a reality. How does one sign up to be a part of this process to be able to live on Mars? What kind of people are a part of this reasearch project, mostly scientists or some everyday people as well?
Here is a link that I found on National Geographic, https://www.nationalgeographic.com/science/space/space-exploration/mars-exploration-article/ which goes into a little more depth about the rovers which you mentioned in your post.
-Cora

Hi, I think this is a really good topic to discuss. As humans travel farther from Earth, we must learn how to sustain human life in the extreme environment of space at the Moon in preparation for human missions to Mars. So it’s very important to do it!