Marines vs. other branches

Home Marines vs. other branches 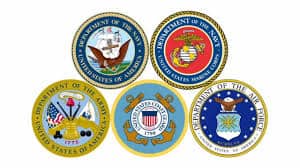 There have been debates as to which branch of the military would be considered the best of the best. Marine Corps, Arny, Navy, or Air Force. What about the Coast Guard, you may ask? They’re not a branch. Now to answer the question as to which branch is better, let’s look at the numbers for each branch. The Army has roughly 1.3 million active duty and about 865,000 reservists. The Air Force has about 321,444 active duty, 141,800 civilian personnel, and 69,200 reservists. The Navy has roughly 375,000 active duty, with 332,507 officers and enlisted personnel. The Marine Corps has about 186,000 active duty with another 38,500 reservists. Of all of these the Marine Corps is the smallest branch in the US Armed Forces. Wouldn’t the Army be better with 1.3 million active duty? Maybe. But the Marine Corps history shows otherwise. Here are the reasons why the Marine Corps is better. First reason. It was founded in a bar. That’s right, on the 10th of November in 1775, a couple of guys in a bar decided they didn’t really like the British and wanted to form a group of mean SOBs. Hence the Marine Corps was formed, in a bar called Tun Tavern. Reason number two as to why the Marines are better. During World War 1, in Belleau Wood in June 1918. In March, the Germans launched an offensive along the Western front in France. The Germans were hoping that 50 divisions could overwhelm Allied forces, before Americans could cross the Atlantic to back up Britain and France. The Germans actually gained a significant amount of ground, but was halted in May, when Marines like the 2nd Division and it’s 4th Marines Brigade charged into the chaos.

Fighting around Belleau Wood pitted five German divisions against the US Army’s 2nd division, with 9,500 Marines from the 4th brigade. A wheat field lays southeast of the wood, where more than 2,000 German troops with 30 machine guns embedded themselves in Belleau Wood, with machine guns pre-aimed across the wheat field. In the first few days in June, the 4th Marine brigade dug a defensive line southwest of the field. Battalions from the 5th Marine regiment dug in left of them and the 6th Marine regiment dug in to the right. French soldiers retreating warned the Marines of the oncoming German offensive, to where Capt. Williams responded with the famous quote, “Retreat, hell we just got here!”. The Marines stood their ground and held  back the German offensive, forming their own strategies to assault German positions. What do you think these Marines did? They decided to say f you and charged the German lines, running across the wheat fields, taking heavy casualties, but came out on top. The Germans retreated, and not only did Marines hold the line, they gained ground when outnumbered by Germans.This was where Marines were given the name “Devil Dogs” by the Germans. Other reasons include World War 2, the flag raising on Mt. Siribachi, Iwo Jima. The Japanese said Iwo Jima could last a thousand years. Nope, Marines raised our flag on it in a number of days. I’m sure all of you have seen that iconic photo. Marines, since its formation, have been winning battles, despite the odds, with unwavering courage, commitment, and bravery. What other stories have you heard from other branches that are as badass as Belleau Wood. Aside from the US Army storming the beaches of D-Day. Marines are the smallest branch, but continue to fight and win.

Now aside from all this, each branch has its own specialty. I respect all members of the branches of the Armed Forces. The branches rely on one another through combined arms and win battles. At the end of the day, they are all brothers and sisters in arms who would lay down their lives for one another.