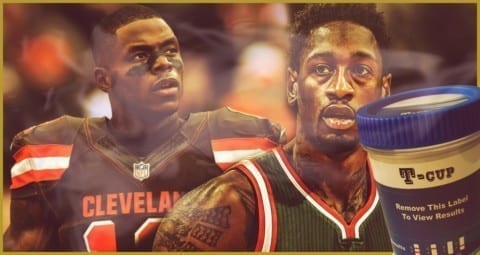 Marijuana for a long time has been the best friend of professional athletes. Endless amounts come out after their career and admit to smoking after a game to relieve pain and stress, or even being high during games. Even with the high usage among players it has continued to be a banned substance in most if not all major leagues. Josh Gordon was a up and coming receiver in the NFL, In 2013 he posted 1,600+ yards and nine touchdowns in just 14 games. Then it was revealed he failed a drug test for marijuana and was drunk and high every game. While still being the best receiver in the league that very same season. Now josh gordon has been suspended so many times it could be permanent.

Ricky Williams is the perfect example of this, he is one of the most egregious examples of how this policy was wrong. Unlike Josh Gordon, Ricky only smoked weed and had no off the field issues. He was a heisman trophy winner for the University of Miami in 1998, He started smoking his heisman season. He said “ I really used it as an aid to recovery,” he said. “After busting my ass at practice, I’d come home and smoke a little bit, and I felt good. It helped me get up the next day, ready to go back to work.” But then he was busted and the NFL sent him to rehab with three counselors and made him lose the love of the game as a hall of fame potential running back. But now that the drug is legal and more acceptable these stigmas and punishments are corroding along with the stigma in everyday life.

But just yesterday, The NBA was the final professional sports league to stop testing for marijuana, a trend set by the MLB and shortly followed by the NFL. I completely agree with these decisions. The physical trauma these athletes endure, day-in, day out is inhuman, especially football. In a sport where your main goal is take someone out every play, many times with your head, you are going to need some type of medicine to help yourself, so why not a universal, safe, naturally occurring drug instead of opiods?

Then there are the athletes that don’t get caught during their time in sports. There are countless examples of athletes like Harrison Barnes, Kevin Durant, Donovan Mitchell, etc, etc most of your favorite athletes smoke weed to relax. Calvin Johnson, or megatron, a first ballot hall of famer, who set tons of records in the NFL, revealed in an interview after he retired “ I can get Vicodin, I can get Oxy[contin]. It was too available. I used Percocet and stuff like that. And I did not like the way that made me feel. I had my preferred choice of medicine. Cannabis.” The Opioid epidemic is a whole other problem that kills millions of people every year. Cannabis has never killed anyone just by getting high. If these athletes are choosing a safer substance to keep themselves going to perform for the fans then they should be left to do their own thing and people should just mind their own business.

Dear Nate,
I am impressed by your post, “ Marijuana in Professional Sports” because you mention how athletes use and should use marijuana as a stress reliever because of the physical trauma.  Those who play Football get hit everyday and there is a high chance that many have received concussions but have not come forward. Some smoke weed to help injuries such as these instead of opioids.
One sentence you wrote that stands out for me is: “ The physical trauma these athletes endure, day-in, day out is inhuman, especially football. In a sport where your main goal is to take someone out every play, many times with your head, you are going to need some type of medicine to help yourself, so why not a universal, safe, naturally occurring drug instead of opiods?” I think this is a big factor because the NFL and NBA and MLB have stopped testing for marijuana so this would help athletes with suspensions as well as random drug tests.
Thanks for your writing. I look forward to seeing what you write next, because your topic was interesting as well as your choice of words
Jose

I agree with that drugs in the NBA should be used by players because it’s to much stress for those who go through a lot in the NBA.
One sentence that stand out to me is ¨There are countless examples of athletes like Harrison Barnes, Kevin Durant, Donovan Mitchell, etc, etc most of your favorite athletes smoke weed to relax.¨ The reason why it stand out to me because how bout if those players are big in the NBA and that’s the reason why they didn’t get caught. Thanks for your writing. I look forward to seeing what you write next.

Love your work Nate, your points and reasoning about the athletes and how it has or hasn’t affected the player. “You are going to need some type of medicine to help yourself, so why not a universal, safe, naturally occurring drug instead of opioids?”, it was a good point on how it benefits them. I believe other people need to understand how marijuana could help others so here’s another link, https://collegian.com/2021/04/category-sports-professional-sports-continues-to-play-catch-up-with-weed-laws/

Very nice job on this one. This was very well written any honestly feels like it’s coming from the perspective of these professional athletes who went through the struggles of having to deal with it. Marijuana does not enhance sports performance, and is mainly used to combat pain. I think allowing players to use it is more than acceptable, and should even be pushed. Prime Athletes, such as Calvin Johnson used marijuana before every game to help with pain. If superstars are able to battle through more pain and play for a longer amount of time, this could ultimately bring in more revenue to the leagues they play in. It’s a win-win situation.

This post was very well laid out and got the point across efficiently. Good job using applicable examples and describing how different things impact them. It will be interesting to see the future of drug rules and usage in sports.

Nice work Nate! You really brought up some strong points coming first hand from the mouths of these athletes. The rules of the usage of marijuana are changing everyday and becoming more progressive. I’m excited to see how this effects it’s readers and what the future of our nation and major league sports looks like, with the progressive movement behind marijuana.