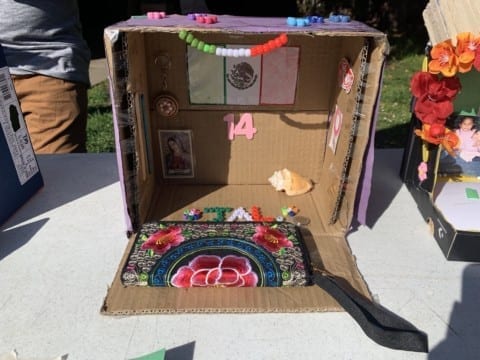 The two main identities that represent my shadow box are being Mexican and being a Female. I choose to put these two identities in my shadow box because in both identities there is a lot of counter and dominant narratives. I say this because in the past and not much in these days their has existed sexism. Also in the USA a lot of people are Racist to Mexican people and talking crab. Additionally the items that I’m going to mention the most important / significant  items in my box the Mexico Flag , La Virgen de Guadalupe , Mexican pesos , The female gender symbol. I say that these items are important for me and also for other people because each has a different important story. In Mexico La virgen de Guadalupe is very important because she is part of our culture / religion and over their we celebrate her and she also has her own day. To finalyzed I also put the gender symbol because I identify as a female and I’m proud to say it.

Dear Maribel,
I am content about your shadow box and artist statement because it shows the truth about yourself. One sentence that stands out to me is “I also put the gender symbol because I identify as a female and I’m proud to say it.” I think this is very powerful because it shows how you as a female won’t give up even if there is many stereotypes placed on you. Another part that I think I really like about your shadow box is the colored flag. This stood out to me because it shows where you came from and my family is also from Mexico as well. Your post connects to me because i’m a 14 year old as well, my family is from Mexico Jalisco too and I am also proud to be a female. Thanks for writing. I look forward to seeing you write next, because you are a very strong writer and artist, your work is very creative and interesting.

Dear Maribel,
I’m so glad I was able to read about your story because I too am a female Latina! I really like the different items you included in your box because you explained clearly and with a personal tone as to why those specific items are important to you and your culture. I strongly agree with you that there have been many racist attacks and judgement towards Hispanic’s especially by the American government. Another thing I liked about your story was that you explained why La Virgin De Guadalupe is a big part of your culture, it really gives people insight to the Mexican culture and values (fun fact, my birthday is actually on December 12th, which is the day we celebrate La Virgin De Guadalupe!!). Overall, I really liked your shadow box and enjoyed ready about you and your culture! Thank you for sharing!

Dear Maribel,
As a Latina with Mexican roots, I appreciate your shadow box and admire it. My father is from Guadalajara, Jalisco and I’m more than happy I get to read your story and notice throughout that we have a lot in common. I feel like you covered the important factors that identify you and defined the importance of each object in your project. I definitely agree with you that racism is sadly still around and people judge by the color of our skin and not our knowledge. But never feel less than others and always stand up in what you believe in. When you said, “I say this because in the past and not much in these days their has existed sexism.” , do you believe female rights are equal to male rights now in the present-day? Overall, Thak you for sharing your shadow box and expressing your thoughts and family roots!