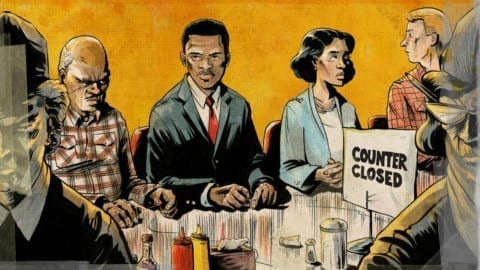 The first sections of March: Book One by John Lewis might leave a reader feeling happy because it’s about a movement to stop segregation between Black and White people. Many Black people protest by going to “whites” only bathrooms and disobeying these horrible laws back then.  An example of this is on page 96: “Our number swelled to over 200 students for our next sit in.” I’m happy because many Black men and women were participating in the movement, Many Black Men and women were changing America for the better.

A person who participated in the movement that made an impact on America today is Rosa Parks, an African American woman, was arrested and fined for refusing to yield her bus seat to a white man. Many black people followed Rosa park footsteps.  Black men and women would sit-in a white- only restaurant counter and ask to be served,  people were inspired by her, and decided to join her. This opened a new phase in the Civil rights movement.

After this part of the book, most readers probably will be looking forward to reading the March vol 2 because You can gain knowledge on many protests and be able to teach others. In March, Book Two, I predict that it’s going to be about another protest that has happened.