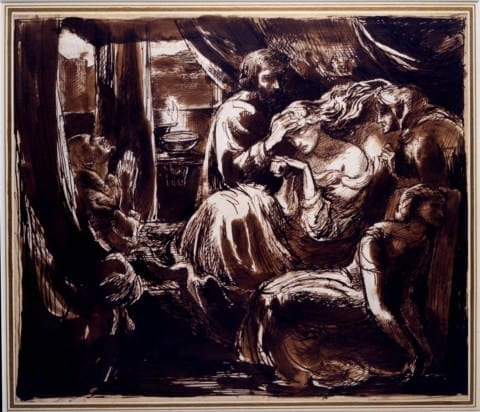 For my monologue project, I selected lines from a monologue that shows Macbeth at his most vulnerable from Shakespeare’s play,”Macbeth” I chose to learn Act 5, Scene 5, lines 20-31 as my monologue because it shows how Macbeth reacts to the death of his wife.

The monologue consists of Macbeth, and Seyton, in this monologue Macbeth is speaking to himself after being informed that his wife is dead. He is monologuing about what is plaguing him. This monologue is heard by Seyton. The monologue takes place in Macbeth’s castle where, Duncan used to reside, this makes Macbeth feel pride.

The main conflict in this scene would most likely be Macbeth grappling with the idea of death. I say this because of the amount of metaphors he gives for death. Macbeth starts to feel hopeless for what he has done. This is part of a pattern for Macbeth where after he goes through with something he regrets it.Over time this builds up to be a main conflict in the story of Macbeth.

In the scene where this monologue occurs, Macbeth is quite a gloomy character. This is especially true after he kills duncan. Macbeth becomes foolish and unattentive. This seems contradictory to his previous state of mind earlier in the play.

In the monologue, words like “Life’s but a walking shadow, a poor player That struts and frets his hour upon the stage, And then is heard no more, as well as the word choice in the sentence “It is a tale Told by an idiot, full of sound and fury, Signifying nothing.”reflect that Macbeth is committed to obsessing over the concept of death.i believe that throughout the play they avoid using terms because it upsets him . The words “And all our yesterdays have lighted foolsThe way to dusty death.” represents the feeling of being lost that Macbeth is experiencing after lady Macbeth died, contributing to his overall broken state of being.

If it was up to me to stage this scene, I would most likely make the actors playing Macbeth pace back and forth in a castle in order to set the mood of loss. This might represent Macbeth‘s feelings of sadness after he realizes that lady Macbeth is dead. I would also add some props to the scene, for Macbeth to perhaps grab onto something when he hears the news in order to show a hopeless state of mind. If I were to direct the actors, then I would most likely encourage Macbeth to be a bit lethargic, and give off a feeling of being depressed in an effort to make his character believable.

In this monologue, Shakespeare used certain poetic elements to enhance the emotion being portrayed in the scene. As I mentioned before, the main theme in this scene would be Macbeth grappling with the idea of death and the use of poetic elements really reinforces the impact of Macbeth‘s emotions. For example, Shakespeare used iambic pentameter as a feature in his writing to provide tension in the scenes, as well as allusion to give the play an enigmatic feel.

All in all, the monologue in Act 5, Scene 5 is a prime example of an effective piece of writing by William Shakespeare that gives some insight on how his characters act when alone.

I like your tone and your pacing because the way you speak says that the character is feeling sad. Macbeth is speaking as if he gave up at night. I admire the way that you described your scene. I like the way that you present Macbeth. One sentence that stands out to me was if it was up to me to stage this scene, I would most likely make the actors playing Macbeth pace back and forth in a castle in order to set the mood of Lady Macbeth “In the scene where this monologue occurs, Macbeth is quite a gloomy character. This is especially true after he kills duncan”. I like the way you described Macbeth.

i admire how in detail you got, and how you showed a very good understanding of this scene, and Macbeth overall as a character. i also wrote about how Macbeth is obsessed with death, and having power, overall i completely agree with everything you said.

I feel like the things you said about Macbeth as a character is very insightful. You noticed how Macbeth has a pattern of guilt. Macbeth is trying to cope with the idea of death and the way you analyzed that is very interesting and intelligent.