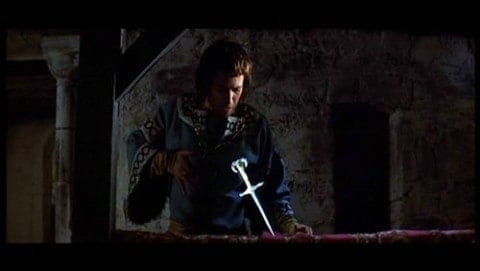 I picked lines 44 through 55 of Act 2 Scene 1 because I thought the flow of  Macbeth’s speech would be easier to remember. There seems to be a pattern in the soliloquy with the choice of words, which would help me memorize where each line goes. I also picked this scene because of the way that Macbeth’s sanity was shown, and how his mood changes.

In this monologue, Macbeth is in his castle during the night when everyone else is asleep, speaking of his thoughts of killing Duncan before he does the deed of the actual murder. He’s seeing a dagger in front of him, when it isn’t actually there. The fact that he is hallucinating right before he murders his king, shows how nervous and how mentally unstable he is at this point.

Macbeth is a dynamic character because he goes through a lot of character development. In the beginning of the book, Lady Macbeth tries persuading him to kill the king while he does not want to and thinks it’s a crazy idea. In this monologue, he is so out of it that he literally imagines a dagger in front of him, right before he pulls his actual dagger out to go and actually murder Duncan. Macbeth says, “Proceeding from the heat-oppressed brain?” In this quote, he is admitting that he is ill, mentally.

I would stage this scene in an area where no one else would be in the middle of the night, because Macbeth is talking to himself and reflecting on how he’s feeling. I might choose to stage him in the bathroom where he is looking at himself in the mirror, possibly washing his face to wake him up a bit before he leaves to kill the king.

One theme that this monologue illuminates is self doubt. Macbeth is doubting his own sanity because he’s hallucinating and questioning himself. Shakespeare uses elements of poetry to get this theme across by using phrases such as “heat-oppressed brain”, “fatal vision”, “false creation” and using rhythm in the soliloquy. It makes the speech seem more intense and meaningful to Macbeth’s state of mind.

Dear Milo:
I am amazed with your performance of the monologue, “The tragedy of Macbeth”, by Shakespeare because I saw that you understood the scene. When you performed it you actually sounded like you were acting he scene. overall I think that you did good.

Your performance of this monologue helps me to understand this character better because it shows how Macbeth is a dynamic character. It helps me understand because of how in the explanation of the monologue you mentioned that at first Macbeth didn’t want to kill Duncan, but h=then he decided to kill the king. So it shows how Macbeth changes at the very beginning of the Book.

Thanks for your performance of this monologue. I look forward to seeing what you make next. I hope to see other things be done, Good Job.

I loved how in depth your monologue analysis was, especially the lineI might choose to stage him in the bathroom where he is looking at himself in the mirror, because i think that would be perfect for this scene.

I can’t wait to see more of your work.

i liked that you chose this monologue because it has flow. it was smart of you to choose a monologue you would easily remember. i chose a monologue i was able to relate to rather than one easy to remember.