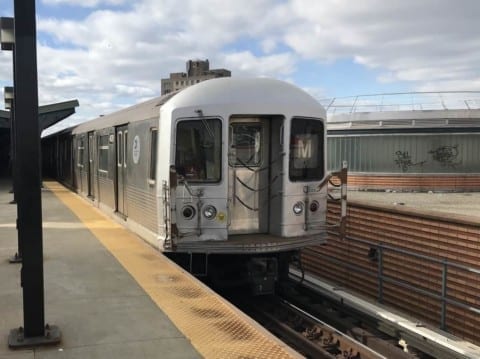 Image via Booker A: M shuttle train at Myrtle-Wyckoff Avenues during Phase 2 of the Myrtle Viaduct reconstruction.

The M train will resume regular service on April 30, running from Forest Hills-71 Avenue, Queens to Middle Village-Metropolitan Avenue in Queens, via Sixth Avenue in Manhattan.

On July 1, 2017, the reconstruction began, and was split into two phases:

Phase 1 (July 1 to September 2): M trains were diverted to Broadway Junction via the J line after Myrtle Avenue, while shuttle buses ran along three routes to replace the M to Metropolitan Avenue:

Phase 2 (September 2 to April 30, 2018): M trains were still diverted to Broadway Junction after Myrtle Avenue, while a shuttle train service operated between Metropolitan Avenue and Myrtle-Wyckoff Avenues, connecting with the L train for a connection to the mainline M at Broadway Junction, and a shuttle bus making stops at Knickerbocker and Central Avenues (which were still closed), to Myrtle Avenue for the J, M and Z trains.

This post, in particular, is very interesting since the M train is essential to coming to school for me and numerous students. Without the M train, it is extremely difficult to come to school. This post goes to show the situations regarding the MTA prior to coming to high school, which fortunately got improved. One sentence that you wrote that stood out to me was “Phase 2 (September 2 to April 30, 2018): M trains were still diverted to Broadway Junction after Myrtle Avenue, while a shuttle train service operated between Metropolitan Avenue and Myrtle-Wyckoff Avenues, connecting with the L train for a connection to the mainline M at Broadway Junction, and a shuttle bus making stops at Knickerbocker and Central Avenues (which were still closed), to Myrtle Avenue for the J, M and Z trains.” This resonates with me because trains are being delayed and it affects other people during this time. There may have been tons of people that went through months of inconsistent and horrid services to get to work, school, or personal needs. The time required to complete this assignment is too lengthy. From Septemeber 2 to April 30 is too much time spent on repairing systems and train lines. In an instance a few days ago, a track issue occurred on the 75th ave train station, which resulted in the F train to reroute and proceeded to the M and R tracks. I was one of the many individuals that were frustrated with the delay that occurred and the lack of care towards its passengers. This results in a call for action as I would like to promote my blog page as the link to it is https://bettermta.wordpress.com/. We would greatly appreciate if you would be able to collaborate and address a few more issues regarding the MTA. This would also be a great opportunity for our site as we slowly grow into our own. I enjoyed the great informative information that was presented and hope that we can really shine a light to issues regarding the services of the MTA.

I am astonished about your post, “M train to return to its normal routine after a year of Myrtle Viaduct reconstruction,” because I am also worried about everything regarding the MTA. The MTA needs to get it together. One sentence you wrote that stands out for me is: “a shuttle bus making stops at Knickerbocker and Central Avenues (which were still closed), to Myrtle Avenue for the J, M and Z trains.” I think this is terrible because the MTA’s train service is so unreliable that shuttle buses were required as an alternative. Another sentence that I noticed was: “The M train will resume regular service on April 30.” This stood out to me because this allowed me to understand how long it took to reconstruct the M line. Your post reminds me of something that happened to me. One time there was construction on a train line and I had to take an alternative route. I was upset that the MTA did not care about its customers. The MTA needs to get it together. Many people are suffering from the unreliability of the MTA and its services. Additionally, I, along with others, have compiled a website focused on addressing the issues of the MTA. The link is right here: https://bettermta.wordpress.com/
I kindly request that you visit our website and review it website to learn more about what the MTA is hiding. I thank you for your insight on this topic and I look forward to you visiting our website and taking a stand against terrible service and safety.
Let’s all work together for a better MTA.

I am intrigued by your post about the MTA. My friends and I are also concerned about the MTA and have seen multiple improvements. As I also use the M train, it is important for me to know that this issue has been fixed, considering how many times I’ve suffered from the delays.

One sentence you wrote that stands out for me is: “On July 1, 2017, the reconstruction began, and was split into two phases…The M train will resume regular service on April 30…” This is important because it shows how the MTA is trying to fix their problem, however, it also shows how long it will take to fix the damages.

Another sentence that made me think about the MTA’s progress is the fact that there are two phases in construction. The two phases are spread about an orderly time, however, it also clashes with the time that many people use the train. It makes me wonder how will the MTA help people adjust to this construction schedule, and ones in the future.

Your post reminds me of something that happened to me. One time there was scheduled construction in a train station that my school was right next to and I had a hard time of adjusting to the construction because it took me a long time to walk to the next train station.

I also have a blog about pertaining to the MTA, https://teensforthemta.wordpress.com/ Please share with others about the importance of the MTA.

Thanks for your writing. I look forward to seeing what you write next because I want to know more about the MTA and other changes that will occur.