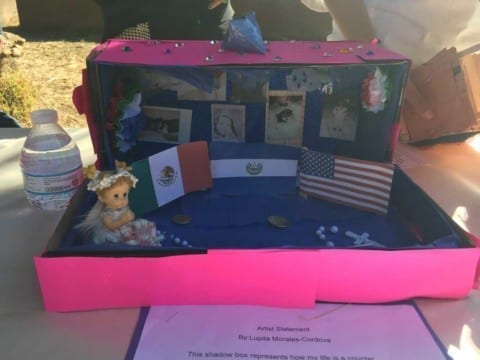 This shadow box represents how my life is a counter narrative toward all of the horrible dominant narratives out in the world. My shadow box is divided into two parts, the outside is the dominant narratives of my life while the inside are my counter narratives. Some of the dominant narratives that I have on the outside are that all females love the color pink, women can be persuaded by diamonds, and that all women must wear dresses to look beautiful for all the men in the world. Also, you might wonder why the background of the dress and butterfly is red. Red was chosen over any other color because it represents how as a Hispanic/Latina I am believed to in the future join a gang. Unlike the outside, the inside is covered in all of my counter narratives. To represent my parents journey to America I decided to make the inside of my box blue. The Mexican, Salvadoran,and American flag represent my ethnicities and the peso is money from Mexico while the quarter is from America and El Salvador (El Salvador used to have their own  money but later switched to American money). I chose to include this because many people may assume that I am just Mexican but I’m not I am also a proud Salvadoran who represents both ethnicities with pride an equal amount. Another counter narrative that I decided to include is that I have had a very happy life in Oakland and I am not miserable. These counter narratives are represented by my baby pictures and my family pictures because I have been very happy since an early age and I don’t feel like Oakland has affected or changed that feeling at all throughout all of these years in fact it has made me stronger. Lastly, I chose to put a keepsake and rosary from my baptism to represent my chosen identity as a Catholic. Being Catholic goes against the dominant narrative that females can’t choose anything for themselves because I chose this religion for myself and if one day I no longer feel like it truly represents what I am fighting for in this world I will, for myself, make a decision about where I will go on from there.

Your shadow box overall was very telling and I enjoyed the symbolism you used to represent what you believed in. You were able to convey your messages uniquely and show that you shouldn’t judge a book by its cover. I myself am a Mexican American however, when people see me they assume I am from Mexico but when they hear me speak its a different story. The colors you used to represent certain aspects relating to your own life was also terrific because you were able to portray messages without the use of words. Lastly, the topic of religion you brought up really got me thinking because I also identify as catholic. As a person I have a right to change my mind even when my religion disagrees with certain values I have, it is certainly a new perspective for me Lupita. Overall your post was really symbolic, eloquent and thought provoking, keep it up!

Lupita, I enjoyed reading about your shadowbox. You share a very strong image about how you fit in today’s society. Color choices, Images presented, and even using a peso to represent culture is very unique. The message about women empowerment is great, that you can accomplish anything on your own and do not need to impress a man with just looks. It is important to embrace your cultures and not forget about your roots. Continue to stay happy!

Thank you for looking at my shadow box and helping me see what I should do again if a project like this were to rise again. I hope that you truly took something away from my writing. I took a look at your great shabox box and it is beautiful and empowering. You are a very powerful and moving person. Once again, thank you for leaving me a comment and taking a look at my work.

Lupita, thank you for giving me insight into your life. I found it so inspiring how you were able to recognize the difference between who you truly are and who other expect you to be (narratives and counter narratives as you called them). I really related to some of the stereotypical ideals you pointed out that people have against women. For example when you said, “… all females love the color pink, women can be persuaded by diamonds, and that all women must wear dresses to look beautiful for all the men in the world,” it made me realize how important it is to define yourself. I also related to how you show pride in your heritage. I am Greek and Lebanese and I also have equal pride in both. Thanks for sharing! -Anna