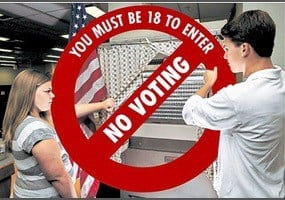 Many teenagers are passionate about political issues today, however they are going to have to wait until they reach the age of eighteen. Since teenagers are readying themselves to become part of the adult world, they should have a say in what their adult world is going to look like. Therefore, the voting age should be lowered to sixteen.

The voting age was lowered in the 1970’s because men were being drafted at the age of eighteen. Being directly impacted by the government, men thought they should at least be able to pick who sends them overseas. Today, teens younger than eighteen are being directly impacted by the government, but with taxes. Teens pay “an estimated $9.7 billion dollars in sales taxes alone”, so teenagers should have a say in who collects their taxes (“Top Ten Reasons to Lower the Voting Age”).

Some would say that teenagers are incapable of making big decisions. This is correct, for the frontal lobe of the brain — the part that controls decision making — is not fully formed yet. In fact, the frontal lobe is not fully formed in both men and women until the age of twenty-five. With the argument of someone should be able to vote when they are capable to make rational decisions, the voting age should be twenty-five. But because of the twenty-sixth amendment, the voting age cannot be greater than eighteen. If the voting age was changed to sixteen, it doesn’t necessarily mean the worst candidate will be picked. Lowering the voting age will increase the chance of having a politician the country/state will actually want: it would be the true majority vote. In the end, people that are being directly influenced by the government should be able to choose their government.