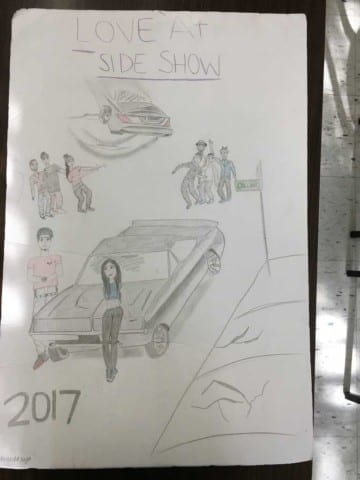 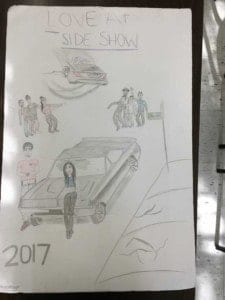 My theme is violence can continue like a cycle and lead to death if not broken. I decided to make a movie poster to represent what is going on in Oakland right now. My modern movie is called Love at a Side Show. My poster shows Romeo and Juliet, called Mikey and Isabel who are falling in love while the two enemy families fight each other over hate or death. It shows a very modern way Oakland because there’s a side show going on in the back and Oakland is all about the shows. At sideshows, people create a crowd as they watch a car doing donuts in the center of the street. This happens a lot in the Fruitvale and East Oakland. This is important because it is a symbol of Oakland but also a lot of violence can happen there because it brings people together from different sides who have hate. I put the sign that says Oakland in the corner so it can represent my city. The cars represent the new generation now compared to Verona back in 1500s. I also used certain colors and clothes. Each gang in Oakland has their own color, red and blue, and dress style so they can represent their own side. I want people to understand this violence and hopefully it will end one day.