Lobbying: Who do we want to be?

Home Lobbying: Who do we want to be? 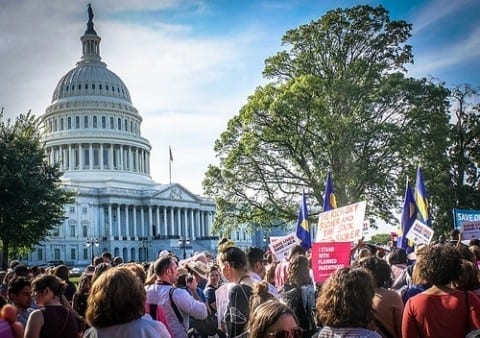 Sadly enough, Madison’s vision for factions did not translate over to interest groups.

An often proposed, frequently dismissed solution to this problem is regulating money in politics. Now, this may not seem directly related to lobbying. Rather, it seems like a free speech issue. However, it has everything to do with lobbying. Interest groups, the organizations that hire lobbyists, often participate in electioneering. This is the process of attempting to influence the results of an election. Many groups like the National Rifle Association have mastered the process, causing their name strikes fear into almost every legislator’s heart. While they cannot legally give millions of dollars directly to congressmen or women they approve of, they run issue ads. These advertisements are not allowed to directly support or oppose a candidate, but they can speak about an issue a candidate is closely related to. Groups like the NRA will use these advertisements as a threat or a bribe to take a certain action deemed necessary to the interest group’s long-term goals.

Regulating dark money in politics can be tough, especially when the Supreme Court ruled that money is free speech in 2010. However, many have been calling for stricter parameters on issue advertisements or a shorter campaign period. More radical thinkers look to the United Kingdom as a good example of to deal with money in politics, where the state provides candidates with equal resources, airtime, and opportunity. These reforms, if implemented, would take away illegal and fairly unhidden leverage from the lobbying community.

The final and probably most agreed on criticism with lobbying I’m going to talk about is the Hyperpluralist theory. This theory states that interest groups wield too much power in general, and create policy gridlock. In other words, competing interests take such strong stances on either side of an issue that lawmakers have a tough time passing legislation. The fear of angering a growing list of groups continues and the shouting on K-street is deafening. In addition to policy gridlock, it can help to create complicated and confusing policy. When the country seems to be going in one direction, it is yanked back in the other, only to be yanked in the original direction again, and so on. Change never seems to take place in this country anymore, despite intense public support for certain issues. One prominent example is the influx of mass shootings over the past few decades. Guns rights interests on capitol hill have almost completely halted gun reform in this country, despite representing a minuscule minority of the population in many instances. Take the shootings in Sandy Hook, Connecticut for example. Here, twenty children ages six to seven, as well as six staff members were shot dead. The country rallied behind Sandy Hook Promise, a group comprised of people who had lost loved ones in the shooting. In fact, one of their goals, universal background checks, was supported by 91% of the general population, and 74% of NRA members. Regardless, the NRA stuck to what it does best: blocking gun legislation. Representing 9% of the public and only 26% of their own membership, the NRA lobbied Congress, and any attempt at reform was shut down.

Situations like this enrage a lot of people. It doesn’t seem fair. In fact it’s not fair. People are beginning to doubt the government is listening to them. This sentiment can be summed up in one term: low political efficacy, or a feeling that ordinary citizens don’t have a say in governmental processes. According to a study conducted by Pew Research Center, only 39% of Americans view themselves as having high political efficacy. Let that sink in. Less that half of all Americans believe their voice considered, despite the United States is a country founded on the notion of granting the people high efficacy.

Isaac,
I really liked this articles because I have always felt that lobbying isn’t fair and supports private interests as opposed to the needs of the people. Everybody should have an equal vote and weight of vote despite who they are and how much money they have. I agree that this is taking away our opportunity to make changes in our country that we think it needs. I look forward to seeing what else you write on the subject.