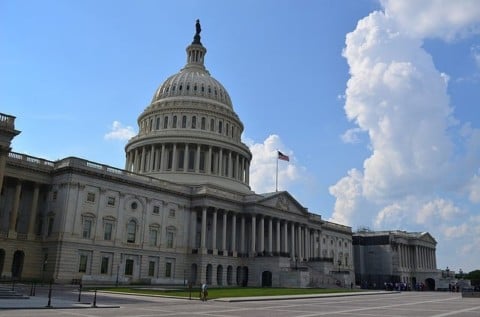 Many, rather, have focused on the source of the problem. Numerous legislators, take John McCain for example, have expressed concerns specifically about the concept of the revolving door. In an address to congress in 2007 regarding the Lobbying and Ethics Reform Bill, McCain said he wanted to create a bill that would:

address the problem of the revolving door between government and the private sector. [This] bill would strengthen the lobbying restrictions on former senior members of the Executive Branch, former Members of Congress, and former senior congressional staff.  It would require that Members publicly disclose negotiations they are having with prospective private employers to ensure there is no conflict of interests.

To clarify, the term “revolving door” refers to the trend that retired legislators become lobbyists. While this simply seems like a career change, it is a lot more complicated than that, and complicated enough that it warrants a discussion in the country’s highest law making entity. Legislators and their staffers make far less than lobbyists can. Legislators make $174,000 annually. Compare that to the $1,032,334 a top lobbyist Rick Pollack makes every single year, and then becoming a lobbyist becomes very financially attractive. This is where the problem lies.

Congressmen and their staffers often get job offers that act as bribes. As McCain alludes, there are already restrictions on former members of the government. However, these restrictions have not been very effective. K-street still pays lobbyists with former government experience about three times what they pay lobbyists without that experience. The Lobbying and Ethics Reform Bill provided a good start to clearing this problem. It proved congress was actually willing to take action on the issue. Unfortunately, the rules and regulations it created were so porous that 47% of all the legislators who left office since the bill went into effect are currently participating in Lobbying. Clearly there is work to be done.

Another problem of lobbying traces its roots back to the 18th century when interest groups were merely “factions” or large, decentralized groups of the population who felt the same way on an issue. In Federalist Paper #10, James Madison, the driving force behind the constitution, was uncomfortable with factions. He argued that these like minded groups are generally selfish and will suppress opposing viewpoints if given the chance. Essentially, warring groups would come to tear the country apart. Obviously, with the young nation fractured, broke, and more importantly wondering if a government for the people is even possible, this was a huge priority for the founding fathers. Madison devised two ways to deal with factions: “the one, by removing its causes,” or essentially snuff out freedom of speech, or the second, “faction would counteract faction, and something resembling the public interest would emerge from the kicked-up dust of political confrontation.” This assumption that an equal playing field on K-street would form has carried out into the current political climate.

For the most part, this assumption has been fairly accurate. In general, when one group of a certain ideology rises, an opposing group goes with it. And the country certainly hasn’t been torn apart by warring interest groups. However, with the rise of money in politics after citizens united, as well as a lot of successful grassroots organizing and ground work, certain groups have created inequality in the “marketplace of ideas.” According the the Elitist Theory on interest groups, business interests have become the most powerful. They argue that due to court decisions like Citizens United back in 2010, which deemed money free speech coupled with a lack of regulation for political expenditures, business interests have naturally become the most powerful, because they have the most money. With that money they hire the best lobbyists, run the most advertisements, and if they’re shady, give the most attractive bribes.