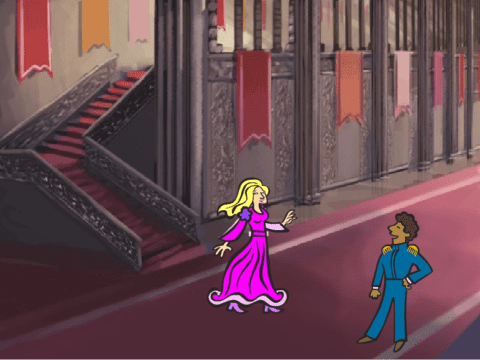 Making a scratch animation, is harder than most may imagine. You need to have patience, to sit through all of the technical difficulties that come your way, and be able to fix them. When making my scratch animation, I had an abnormally large amount of obstacles. Firstly, I had no computer for it was broken, proving to be itself a major issue, and creating alternate endings that taught a lesson was also quite difficult.

My animation was based off of “Little Red Riding Hood’, but had a major twist on the plot, while keeping the same lesson, but similar plot as “The Bear”. It took me 3 hours to complete my project, 3 hours of progressive work that is. Once i got the hang of it, the project became easier and quicker to do. I noted that if I laid out all the blocks I would be using, I would save a lot of time by not scrolling around searching for blocks.

In my story, a princess is sought after by a group of criminals. Her father has her locked up in the castle, for her own safety, and she is not allowed to leave the grounds. The nurse in the castle, is also a witch, and offers the princess access to the outside world. The Princess must choose to take the offer, or do the right thing and stay, and learns a valuable lesson either way. “Do not talk to strangers” and “Don’t lie to your parents”.