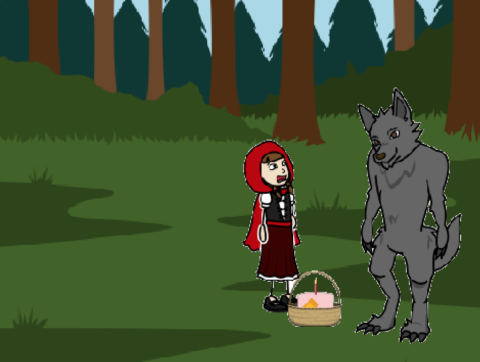 Hello fellow viewer, I would like to introduce you to my fairy tale animation. You’ve heard of Little Red Riding Hood before, right? It’s the story about a little girl who sets out to visit her grandma and meets a wolf. She decides to tell it where she’s going. After that, her grandma is eaten and a little while after, she is as well. My animation provides a choice where you can choose whether or not to tell the wolf where Little Red Riding Hood is going. In my alternate ending where Little Red Riding Hood doesn’t tell the wolf, the wolf ends up dead with axes sticking out of its body. Creating the animation wasn’t a simple process. In fact, I had to first come up with what I was going to make the animation about. I chose a simple, yet meaningful fairy tale and wrote a script based off of the original story, which was written by Charles Perrault. The next step was to create a storyboard for my animation, a reference that I could base my final product off of. After the storyboards were created, I made the actual animation.

The link above is there so you could see the script and storyboards I made for my final animation as well as any modifications made throughout the process.