This is an animated version of Charles Perrault’s fairy tale, Little Red Riding Hood. The story is interactive. You can choose between two different endings of the story. The character makes a decision. Each ending shows a moral of the story. In this animation, Red Riding Hood has to choose between telling the Wolf where she is going, which leads to the original ending, and not telling the Wolf, which leads to the alternate ending.

Here is the animated story below:

This is the link to the final scripts: 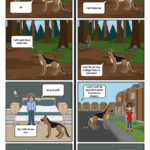 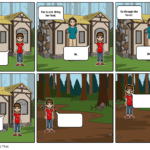