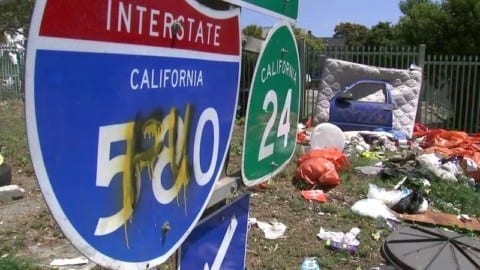 Did you know that littering has become an unacceptable habit for Oakland? Also, did you know that Oakland can face many expenses just from littering? Littering is when people leave trash such as items, objects, on the ground making it look unsanitary. In Oakland, citizens have noticed the mess people are leaving behind especially the Mayor of Oakland who is angry. As Oakland residents, they aren’t picking up or making a change to clean our trash that is in OUR community. It’s causing a problem for Oakland residents too because they will be paying an expensive fine for littering. Based on research, littering has become an awful habit for people in Oakland because it’s increasing the pile of trash that is being thrown onto the streets and illicit dumping costs the city tax money.

Firstly, Oakland has a surplus of trash and are trying to clean it up, but it’s still too much. In the article, “Battle for the Bay wraps up with record turnout in San Francisco, Oakland and San Jose” it talks about how Oakland had the most picked up trash by volunteers from Oakland and people from the Bay Area participated to compete for the San Francisco vs Oakland clean up day, on September 21, 2019. In Oakland just about 11 miles searching for trash to pick up and clean, there was a shocking number of trash picked up by volunteers and there was 109,460 pounds of trash, founded (SF.gov ). This highlights that Oakland has a problem that could have a high chance of increasing trash in the bay area, polluting the streets, drains, that could affect the water too.

Secondly, in the article “How Oakland Tackles Costly Illegal Dumping With Technology and rewards” by Amanda Parr, she talks about how if Oakland residents don’t pick up after their trash, they will have to pay an expensive fine for illegal dumping. She wrote, Oakland, California has an illegal dumping problem that costs the city $5.5 million per year. This demonstrates that if residents in Oakland don’t realize or make an impact for illegal dumping then they will have to pay the price of others.

So Oakland needs a solution to stop dumping because it’s illegal, harmful, and disrespectful to the environment. Solutions that Oakland can use is raising money for volunteers to provide with equipment to clean up around the streets where most trash is thrown because residents know that they won’t be caught and stopped what they’re doing. In an interview with an Oakland teenager she feels that a solution is “ A solution to help Oakland is to make cleaning outside the streets into a paid job, so more people can participate and make streets sanitary” (Martinez). This solution is beneficial because residents will actually be paid with money then this will motivate them to clean more than they ever have. After cleaning neighborhoods, streets, this will be useful because they will realize how the cleaning helped out the community and make residents pleased with where they live.

In conclusion, Oakland residents do have a nasty habit of throwing trash onto the ground, and not being able to pick up after themselves. Also, making Oakland have to pay a huge amount of money for illegal dumping. But this could change if people congregated when cleaning up, giving people motivation to participate in activities that can help the environment surrounding us.

This is credible because this article took place in San Francisco and Oakland residents volunteered to be in the competition of cleaning so they have experienced how much trash they have picked up in the bay area.
“Battle for the Bay Wraps up with Record Turnout in San Francisco, Oakland and San José.” San Francisco, 24 Sept. 2019, sf.gov/news/battle-bay-wraps-record-turnout-san-francisco-oakland-and-san-jose.
This article talks about how Oakland and San Francisco came together and made a competition that helped out both of the communities clean up trash, they then realized how much trash there was out there in public spaces or outside where we live.
Parr, Amanda. “How Oakland Tackles Costly Illegal Dumping with Technology and Rewards.” Medium, Fixer Stories, 19 Mar. 2019, blog.seeclickfix.com/how-oakland-tackles-costly-illegal-dumping-with-technology-and-rewards-55ba408ad3ab.
Pablo, Angelina, and Divianca Martinez. “Littering.” 19 Dec. 2019.