LGBTQIA+ : Respect is the Gay Agenda 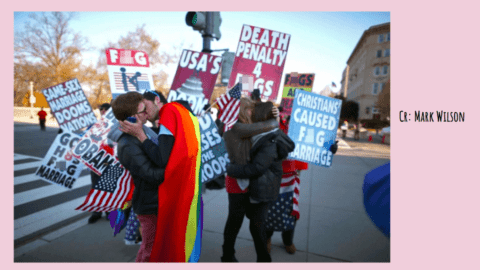 The LGBTQIA+ movement has become more well known throughout America. This movement fights for more acceptance of those in the community, seeking for the right to be who they are and love however they want regardless of gender and sex. I have been passionate about this issue for a long while, especially more when I had heard that gay marriage was legal in 2015. That was when the LGBTQIA+ community gained much more support nationwide, but also much more outspoken hate nationwide. For me, there was a need to speak out for the community. As someone whose friends are all a part of the LGBTQIA+ —myself included—it became much more relevant to address the issue. I have known my own friends online whose last goodbye was when they had to go to conversion therapy, saying that their parents cannot accept that they “associate” themselves with “those” people. Friends who were (and still are) in pain because their parents said they felt uncomfortable with who they are. That should not happen, not today, not any day.

The movement has been going around in America for so long and has become so prevalent that it is impossible to ignore. As someone who grew up with social media and in a diverse part of the nation, I had already known some things about the topic before going into in-depth research. For instance, I knew most of the reasons why homophobia exists, and I knew what misunderstandings went into those reasons. There are reasons such as differing interpretations of religion, or growing up in a household that follows “traditions.” In addition, I have known of the hate crimes, the families disowning their children scenario, the discriminating work places, and the high suicide rates. But, I don’t just know of other people hating on the LGBTQIA+, but like in every group, there are those that create hate inside the community. I know that a handful of the LGBTQIA+ blame an entire religion for hate, which is also not right. There is even phobia in the community. The most prevalent is biphobia and ace erasure, in which they are always put into the spotlight as people who “cannot make up their minds” or “special.” Those is just the things that I had known from common knowledge and not from research.

As I went into the research, I began by going to LGBTQIA+ statistics. The percentage of people in America who are LGBT in 2017 was a lot smaller than I thought. However, it is ever growing in percentage as each year goes, and that percentage is growing exponentially. This is not counting those who have yet to come out of the closet or those who have not discovered themselves yet. Another thing is, I did not know that bisexuals are more likely to be sexually harassed than lesbians, gays, and heterosexuals. I compiled all of the information into the slides and combined it with all of the information I knew (and confirmed through research).