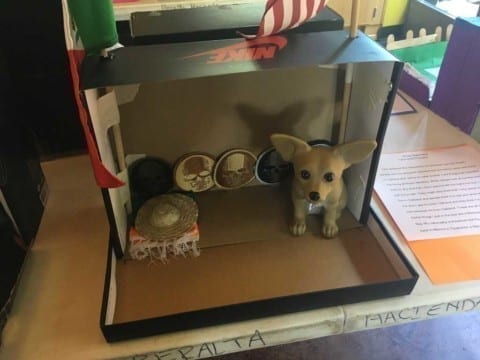 This Shadow Box represents me because I put my chosen identity and my assigned identities that are being Latino and living in Oakland and  being an older brother. I put things that represent me being all those identities. When people look at me they think that I’m shy and that I don’t want to talk but that’s not true I decide just not to talk. They might also think that I only speak Spanish. I live in Oakland and people think it is bad and when they look at me and I say I’m from Oakland and they think I’m up to no good just because I’m from Oakland. These are all dominant narratives. Some things I put in the box are a Mexican flag and a American flag. My nationality is American but my ethnicity is Mexican and I lived in Mexico in Tijuana for a little bit.

I like your items with the shadow box especially the dog it looks realistic I am also doing the same project with the shadow. One question, what does the dog represent in the shadow box? Another question is, what do people call you for a dominant narrative? Other than that, the box looks great and the patches are cool

Hi my name is Madiyah Torres and I am currently attending Fremont High School. One question that I have is the dog and skulls represent in your shadowbox? One thing that I liked about you shadowbox was that you put both flags to represent your nationality and ethnicity.

Hi my name is Angel and the school i got to is fremont high school and we were doing the same project as you.one questuion i have is why are there badge patches in your box?one question i have about your writing is that is saying that every one that live in oakland is bad and the other people that don’t live here are like oaklands a bad place when it’s not and not all people thing oakland is bad (the people that don live here).

The patches are from a video game that i enjoyed and liked and they came in the collector edition of the game and it came with the patches and they mean something but i qwiet don’t remember what they mean .Oakland is not really that bad but they just think is bad because what they hear in the news about shootings and the drug use also. Hope i answered your questions