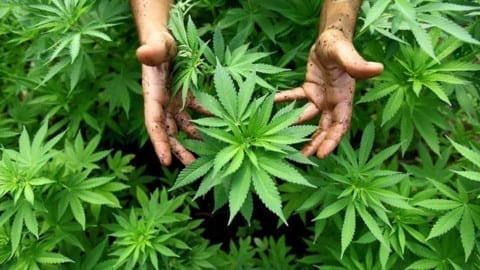 Marijuana has been driven into people’s minds as a harmful drug that can ruin one’s life.  It’s believed to send people down a hole of no motivation, more harmful drugs, major health issues, and laziness.  But for the longest time marijuana was used for medicinal purposes and also as a source of fiber until it was put as a Schedule 1 drug under the Controlled Substances Act.  After plenty of studies conducted on the effects, it’s quite the opposite.  Instead, marijuana is extremely beneficial for us and our state.  It helps eliminate the black market, create a safe government-regulated weed industry, and it generates more tax money.

Ever since Congress passed the Controlled Substances Act in 1970, marijuana has been kept away from the public’s hands.  Slowly the states have been acknowledging the benefits of marijuana and have been legalizing it medically and occasionally for recreational use.  In Montana, marijuana has only been legalized for medical use, while some interest has existed to legalize it recreationally.  There’s still fear surrounding marijuana due to attack ads, politicians, and our parents and or relatives speaking against marijuana.  The newest facts, studies, and research surrounding marijuana should be presented to the people instead of providing beliefs from the past.  If the public was more informed on marijuana with an updated and educated review, then people would be more accepting to legalization.

The biggest benefit to legalizing marijuana would be the tax money.  In this new market with such a high demand, we could add a tax on sales which will benefit the state in many ways.  According to Colorado’s Department of Revenue, the state has raised over one billion dollars in legal marijuana sales from both recreational and medical use.  The Department of Revenue also reported that “the first $40M of the Retail Marijuana Excise Tax revenue was distributed to the Colorado Department of Education’s Building Excellent Schools Today (BEST) program. Excise tax collections in excess of $40M, $2.5M for FY 2015-16, were transferred to the Public School Fund.”

We could really expand our state programs and other projects that could possibly need more funding.  Like Colorado, Montana could expand tremendously on its educational programs or even provide more funding to schools that need financial help.  This tax money could also be used to improve roads and highways, as some of the roads in Montana are in desperate need of repair.

Another added bonus to having marijuana legalized is having it government-regulated and safe for the public.  Now that weed has to meet a certain criteria, it will be safe for the public and they will not have to worry about it being harmful or laced with cocaine or any other psychoactive substance.  People buying marijuana off the black market can now buy it safely from stores and contribute to the state.  Also there will be new jobs due to the many businesses opening.  It will boost Montana’s economy and will allow for more people to work and contribute to the state.

Legalizing helps lower crimes, creates safe weed, brings in a lot of tax money, and it keeps America happy.  By keeping it illegal, we are just spending more and more to keep it away from the public’s hands.  Montana needs to take the steps to legalizing marijuana for recreational use now.  It’s helpful for the both the state and the people.

I am excited by your post, “legalize marijuana in montana,” because I can completely agree with your topics. There have been several studies showing that marijuana is safer than many pain treatments, such as opiods, while being less addicting. I’d also like to add that much of peoples concern from legalizing weed comes from the extremists, and with every society their will be extremists present.

One sentence you wrote that stands out for me is: “Another added bonus to having marijuana legalized is having it government-regulated and safe for the public” I the way you said this is brilliant because currently, the United States is indirectly encouraging the black market by not legalizing weed. People will always aim to get drugs off the black market, and marijuana being government-regulated would mean that this weed is safe for the public, and wouldn’t encourage the growth of the black market, but rather the opposite. It would began to wane.

Thanks for your writing. I look forward to seeing what you write next, because I really believe more people should be aware about this issue, and are mislead by the news. You know, I don’t think a lot of people know of how medically benefical Medical Marijuana is, or it would already be legalized.

The one thing I disagree with you about, is that for the reasons you mentioned, Marijuana should not be only legalized in Montana, but throughout the whole United States.

If you would like to view our blog that my team and I have created, i’ll link it down below. Thanks again!

Devin, I agree with all the points you made. I think that marijuana is extremely helpful in the medicinal sense, ranging from strains made for chronic pain to mental illness. One think that I understand about the anti-marijuana side is that the abuse of any kind of drug is harmful. When it comes to teens having access to marijuana, there has been many studies proven that marijuana has a great, harmful effect on the developing mind. Obviously teenagers will still have access to it, but with a more easily accessible process, I think there would be a bigger effect on how teenagers brains are functioning. One thing to think about: Is smoking weed as a teenager worth the possible brain underdevelopment? http://www.apa.org/monitor/2015/11/marijuana-brain.aspx

Devin,
I agree with you opinion that marijuana should be legalized. My sister who has epilepsy could really benefit from this. There has been dozens of researches done that have proven that it has great benefits. The legalization of this drug would greatly benefit my family, my sister, and maybe even my future. Here is a helpful link: https://www.epilepsy.com/learn/treating-seizures-and-epilepsy/other-treatment-approaches/medical-marijuana-and-epilepsy

The whole pot industry’s success is because of the substance’s exclusivity due to being illegal. This will hurt low income neighborhoods greatly by making a drug that only the poorest of individuals could produce without consequence, into a drug that big corporations can produce, providing little in the way for the poor. Now I see that the legalization of the substance is probably for the best, but you really need to understand the economic consequences of doing so. I also recognize that there would technically be economic benefits in some areas because it would create a much larger pot industry, providing jobs for a wider range of people, allowing some to be able to move up the ranks in a company improving their life more than if it was illegal.

I believe that marijuana should be legalized in every state in the U.S. with it legalized everywhere people will not move into and overpopulate states that do currently have marijuana legalized.