Learning to Fight Back

Home Learning to Fight Back 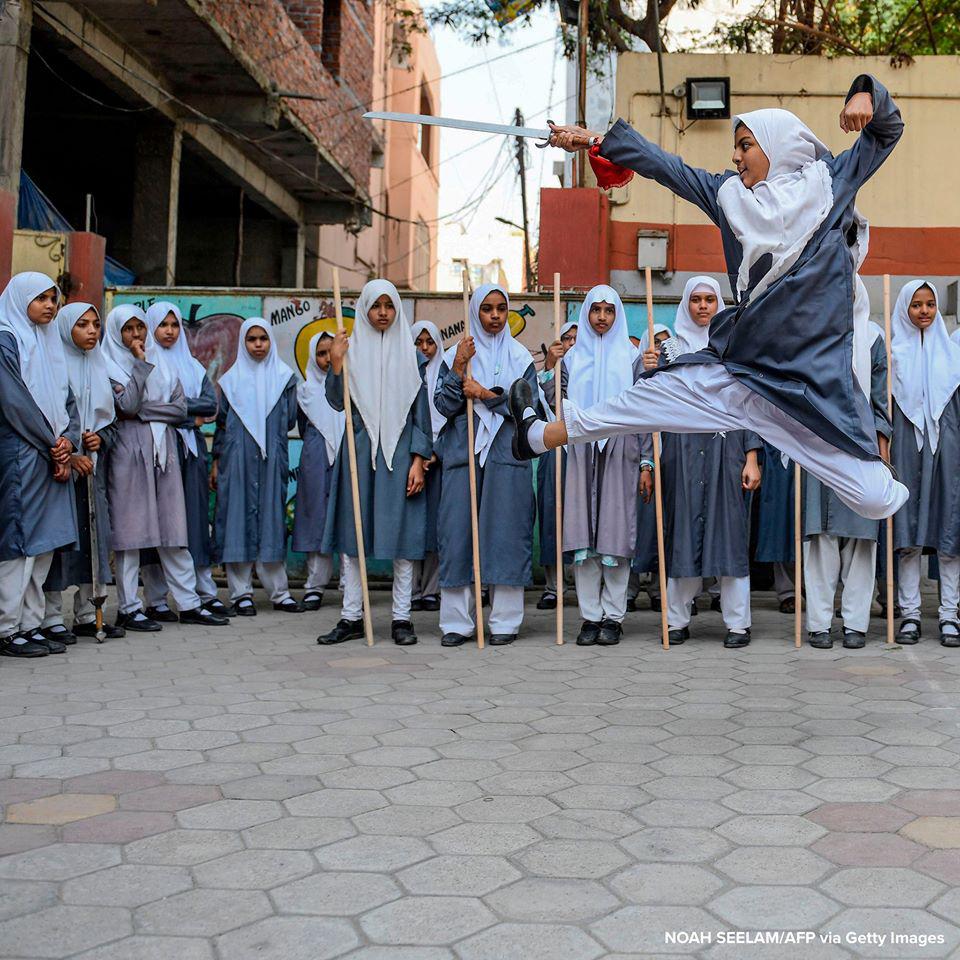 In the article, “Learning to Fight Back” (Upfront) I learned that in India women are getting taught how to fight which is becoming increalsy and very important for their safety. A Muslim high school student in the city of Hyderabad practices Vovinam, a Vietnamese martial art that uses swords and sticks to protect themselves.  Self-defense classes for Indian girls have been increasingly growing in popularity after an accident in which a 23-year-old woman was attacked and killed by a group of men while riding a bus in 2012. By teaching them this skill is giving women the courage to come forward and demand justice, rather than suffer in silence. Since it’s growing so fast, now police departments have begun offering self-defense training and schools providing skills as well so they could feel safer to defend themselves. Lastly, the thought from a high school student said that they aren’t safe but this gives them confidence.

What other techniques should be taught to women in India or other countries?
0
Please leave a feedback on thisx

I think what is happening in Asia with showing high school students is very helpful in giving them knowledge of how to self defend. The good thing is that it’s increasingly growing throughout their country. It’s very sad that they are showing these girls Vovinam after an accident that happened to a woman and the country has to take action before they lose more women.  Like that one girl mentions that they are not totally safe but gives them confidence that they are less likely to suffer and be hurt by a man after they take these classes. I loved that police departments are also playing a big role in training them as well.

I am saddened by your post “Learning to Fight Back”, because it is disappointing that woman in India need to learn to fight. Everyone should feel safe when they’re out in public and the fact that this is happening is sad to see.

One sentence that you wrote that stands out to me is: “Self-defense classes for Indian girls have been increasingly growing in popularity after an accident in which a 23-year-old woman was attacked and killed by a group of men while riding a bus in 2012.” This is bad because the best solution that India has came up with is teaching women to fight for themselves instead of being protected.

Thanks for your writing. I look forward to seeing what your write next, because you seem very concerned on the topic. It also looks like you had extensive research on the topic.

I like how more women are being taught self defense now- it’s sad that self defense is something has to be taught for someone to feel safe. I wish that people could be taught to keep their hands off of other people and respect them instead of needing women to learn self defense, but that seems almost impossible to achieve.

I loved your article and that you answered a follow up question in relation to what you wrote. I have some more follow up questions for you:
How else do these people benefit from self-defense training?
Is it only in one part of India or is it widespread in the country?
Are other countries doing anything similar? What are their reasons for starting these programs?

Thanks for writing this and I look forward to reading more from you.

No not all countries are doing similar things but we should teach women because they are approach a lot. I think they view them as weak and a easy target that why they are going after women. So b showing them how to self defence they will know what to do and how to handle the situation.

This is a really amazing story. My mom used to teach a women’s defense class at my high school. It is powerful to know that people are taking action to protect themselves. “By teaching them this skill is giving women the courage to come forward and demand justice”. I feel like so many people these days just wait for others to take charge and protect them.

I think it is increasingly more and more important for all women to learn some sort of self-defense no matter where they live or the circumstances they live with. Being able to keep yourself safe is so important and I’m so glad that schools in India are offering classes to better protect themselves against threats. This allows women to have more control over their lives, and makes them have more confidence when going out. I really liked your point when you said how this is allowing women to have the courage to come forward and demand justice. Thank you for your comment!

Good day Mr. Ernesto
Your post “Learning How to Struggle Back” got me very sad because it shows the level of sadness on how Indian women have to fight for their own safety. Everyone should feel safe just being there but if you have to worry let alone be a woman that’s worried without someone to protect you is really sad to see.
One sentence that stood out to me was, “Self-defense classes for Indian ladies have been steadily increasing in popularity after an incidence in which a 23-year-old lady was beaten and killed by a gang of men while riding a bus in 2012.”
Thank you for taking the time to send me a message. I’d want to see more of your writing because you add so many details.

Hello Mr.Daniel,
I agree with you 100% of feeling sad for those women in India that they need to fight for there own protection. They should go out in public not feeling scared of what guy might hurt them.

Dear Ernesto,
Your post on “Learning How to Struggle Back” makes me very sad because it shows how Indian women have to fight for their safety. When they go out in public, they frequently carry swords and sticks to protect themselves.
“Self-defense lessons for Indian females have been gradually rising in popularity after an accident in which a 23-year-old lady was assaulted and killed by a group of men while riding a bus in 2012.” is one line that jumped out to me. This is really tragic because this poor woman was attempting to board a bus when she was assaulted and killed by some males.
Thank you for taking the time to write. I’m interested in seeing more of what you write since you include details and make it easy to grasp what you’re trying to express. Until I came across your piece, I had no idea this was going on.
Fernando

Dear, Ernesto
I am super sad by your post on “Learning How to Fight Back” because it is sad how Indian women have to fight for their safety. They often use swords and sticks to protect themselves as they go out to public places.
One sentence that you wrote that stood out to me is when you said, “Self-defense classes for Indian girls have been increasingly growing in popularity after an accident in which a 23-year-old woman was attacked and killed by a group of men while riding a bus in 2012.” I think this is really sad because this poor woman was trying to ride the bus and she got beaten and killed by some men.
Thanks for your writing. I look forward to seeing more about what you write because you add detail and can understand what you are trying to say. I never knew that this was happening until I came across your post.
Ashley

I think its super sad it should even have to come to this point where they need to learn to fight back just so they can get their voices, and rather it should just be a given for all human beings to use their voices when they need or want to. It is also a good thing that they are doing this, especially for themselves.

It’s upsetting that it is such a big problem that these are the precautions women have to take. However, I am so glad that women are training to become strong women who can fight back and protect themselves.

Hello Meredith,
I totally agree that’s this is a big problem and its very sad and by doing tso these women are taking these fighting lessons so that it may give them a little confidence when being out in public.