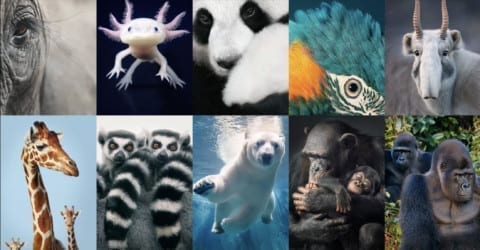 Marine Conservation, Global Warming, and the destruction of animal habitats is the leading cause of animal extinction. Three-quarters of our planet is covered by oceans, which means the ocean provides a home for millions of animal species.

As stated by the National Geographic Society, around 40% of our marine ecosystems have been damaged due to human pollution and an average of 13,000 pieces of plastic in every square kilometer of the ocean. Plastic waste is very problematic because it can take up to hundreds of years to decompose. Fish often get tangled in the debris, small organisms feed off of microplastic and many animals mistake plastic bags for food. Microplastics, toxic chemicals, get passed on by the food chain, which often leads to human consumption. We can limit pollution by limiting down our use of plastic bags, avoiding plastic products, and recycling properly.

The ocean plans an important role when it comes to global warming because they absorb carbon dioxide and generate about half of all oxygen in the atmosphere. The surface layer of the ocean controls global temperatures by absorbing and distributing the heat reaching Earth from the sun. Currently, the oceans are unable to absorb the heat, which is causing the temperatures in the ocean to fluctuate (Darrah). The warmer our seas get the more ice melts, which leads to rising sea levels.

As stated in “Endangered Animals of the World,” animal habitats are meant to be undisturbed, but instead, they are being destroyed. For example, the amount of woodland around the world has been cut down to make room for the human population. Swamps, plains, and lakes continue to disappear because they are being utilized for human consumption and industrial development.

As stated in the “Impact of Habitat Loss on Species,” various animals over the centuries have gone extinct mainly due to the destruction of their habitat. Habitat destruction is identified as an 85% threat to all endangered and threatened species. We need to realize as individuals we are the main cause of animal extinction and if we want to put an end to it we need to act now.

Darrah, Petrina. “Out of Sight, Front of Mind: Why Marine Conservation Is so Important.” GVI UK, GVI, 29 Oct. 2019, www.gvi.co.uk/blog/out-of-sight-front-of-mind-why-marine-conservation-is-so-important/.

“Endangered Animals of the World.” Young People’s Trust For the Environment, 11 Sept. 2014, ypte.org.uk/factsheets/endangered-animals-of-the-world/habitat-destruction.

Lydia, I like that you chose to write about this topic to spread more awareness and to show how passionate and empathetic you are regarding this issue. I agree to your points when you stated that it is more or less humans fault that animal are becoming more extinct since the world is becoming more and more industrialized, which has very many negative effects. I also liked how you gave examples as to how we can minimize pollution and create change to better the environment. Overall, this topic should be more talked about and I’m glad you chose to shed more light on it!

Lydia! First of all-I love it! Your word choice conveyed empathy which shows just how passionate you are about this topic! I like how you gave multiple examples as to the reasons for extinctions, as well as how we can help prevent this in the future. You really placed the responsibility on all of us which is something I think we all needed to hear. Overall, very good job!!

Lydia, I enjoyed your post because I believe there should be more awareness about this topic. I liked how you described all the aspects and included evidence as to the reasons why animals are becoming endangered and extinct. I agree that it is our responsibility to try to reverse our detrimental actions towards the ocean and animals habitats. Thank you for creating more awareness towards this topic!

Hello Lydia, your post caught my interest and I concur along with your explanations that it is the obligation of people to act to save creatures from going extinct. I think that the prove merely utilized is important and includes your contention. I like how you included a few fundamental reasons why creatures are going terminated. I concur together with your particular case that people can decrease their sum of plastic utilize and admissions to form a tremendous distinction. I truly like how you said, “We can constrain contamination by restricting down our utilize of plastic bags, dodging plastic items, and reusing properly.” This quote is pertinent to the subject and gives the peruser an illustration of how they can alter to create a distinction.

Lydia, I agree with your statements that it is the responsibility of individuals to act to save animals from going extinct. I think that the evidence that you used is relevant and adds to your argument. I like how you included several main reasons why animals are going extinct. I agree with your specific example that individuals can reduce their amount of plastic use and intake to make a huge difference. I really like how you said, “We can limit pollution by limiting down our use of plastic bags, avoiding plastic products, and recycling properly.” This quote is relevant to the topic and gives the reader an example of how they can change to make a difference.