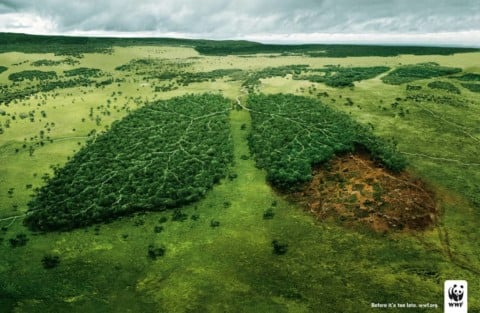 Land pollution is probably the most evident one we can see, but it still can be hard to notice. You can walk in a city, a town, or even in your own neighborhood and notice trash and flying debris in the trees. But pollution does not go as far as litter, it also considers deforestation, expanding of cities, more landfills, soil erosion. From Conserve Energy Future, land pollution means “degradation or destruction of earth’s surface and soil, directly or indirectly as a result of human activities.” Anything humans do that causes a destructive effect is considered pollution. Just like the rest of the other three pollutions, there are many sources of pollution is released from. Land pollution main causes are deforestation and soil erosion, agriculture, mining, landfills, industries, construction, nuclear waste, and sewage. For the scope of this essay, I will be only talking about deforestation.

Deforestation is “the action of clearing a wide area of trees” (Google). Many companies are clearing areas of trees for their needs. There are many examples of deforestation. Farmers clearing areas for cattle, trees cut down for timber, etc. Many of these deforestations are happening in the Amazons. Every year, the Amazon Forest loses about 18.7 million acres each year; this equals around to 27 soccer fields of forest every minute.

Trees help clean the air by taking in carbon dioxide; which is known as carbon sequestration. Trees, like other plants, use the Oxygen-Carbon Dioxide Cycle for sugar and cellulose. Before the Industrial Revolution, the trees and carbon had a complimentary cycle with each other. But now, with humans burning more carbon dioxide into the air, it’s disrupting the cycle. Trees cannot catch up with the increasing rate of carbon and, as all organisms, are trying to adapt to the changes. While they are adapting, they have to disrupt their own functions. They are changing how they store and release carbon. For some species of trees, it’s affecting how much carbon they hold.

The soil that recently went through deforestation becomes infertile and cannot sustain life anymore. This is known as soil erosion. The topsoil, the most organic part of the soil layers, is what the plants need. There is also such thing as water erosion; which can lead to soil erosion. After erosion has happened to the topsoil, plants and other living organisms cannot live or feed on the land. Soil erosion as an environmental impact. The biggest impact that is easily seen is the loss of life. Trees and plants go and live in the soil with no nutrients. No plants mean no animals. Plants attract herbivores, and then herbivores attract carnivores. But with no plants, it stops the food chain. But without plants and trees, it also affects the atmosphere. With plants and trees, they create a balance in the atmosphere. But the balance is disrupted without them. The imbalance in the atmosphere causes things like global warming, irregular patterns in the certain area, flash floods, and increase in carbon dioxide.

Tanner,
This is an interesting post. I found the statistic about the 27 soccer fields a minute very surprising that is a lot of land being ruined very quickly. I think this is a very important issue that the whole world should address before it becomes too late to do anything about climate change and it’s effects.

Tanner, your article is informative about the current situation regarding our environment. Right now, most first world nations are attempting to remedy this. However, this is proving incredibly difficult as we must increase the rate of our resource consumption. Areas such as the Amazon rainforest in South America are current targets for deforestation, and images depicting the carnage left behind are common. Despite the international crisis this poses to both this generation and any future generations, little work has been placed forwards to stop it. While nations in northern Europe and leading the world in recycling energy and waste, the rest of the world is still lagging behind.

Tanner,
This is very well written article that deals with a very important issue in today’s world. I believe that us human beings are slowly killing the environment and we need to make a change in order to save the world. With the deforestation in certain parts of the world hurts the air and the ecosystem in the area. I like how you are bringing this to the attention to this issue in you article.
Zach Jerome