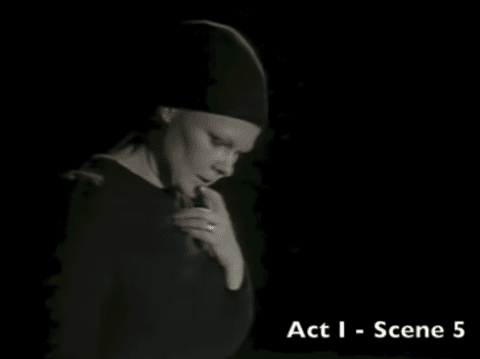 I picked Act 1, Scene #5 Lines 16-33 first off  because I find Lady Macbeth to be a complex character. This passage takes place right after she received the letter from her husband, Macbeth, talking about how he met the witches and all the prophecies. Lady Macbeth is expressing how she feels that Macbeth will not be brave enough to go through with killing King Duncan. This is kind of relatable to me, and that’s why I chose it, because I often feel like people talk a lot about doing things but never go through with any of it and that is clearly what Lady Macbeth is feeling here about Macbeth.

In this monologue, Lady Macbeth is speaking to herself, well she is speaking to the letter Macbeth gave her, but no one else is in the room. She is sitting in her bedroom when she recieves

The letter which leads me to assume that she stays in her room to read the letter. I believe it is in the morning just after she woke up. This is right smack in the middle of the rising action in the play, it is just after Macbeth won the war between Scotland and Norway. This is where the real issue in the story or rather that central conflict is introduced because it sets off everything in the play.

The main conflict in this scene is, Lady Macbeth is pondering Macbeth’s decision to listen to the witches prophecies and kill King Duncan. She is wondering if he will really go through with the deed. I say this because Lady Macbeth is doubting about her husband’s courage. She starts to feel fear for what Macbeth is saying. She is saying that he isn’t a coward but he isn’t evil enough to go kill Duncan. This is sort of where Lady Macbeth’s deviant side comes out because due to her lack of courage in Macbeth, she is realizing what she has to do. Later on you see this come into play because she tries to manipulate Macbeth into going through with it until she drives herself insane too.

I think the way I would stage this play is Lady Macbeth would be sitting in her bed reading and such when the messenger comes in to give her the letter, she would get up quickly and abruptly when the messenger enters. After she is given the letter, the messenger would exit the room because Lady Macbeth must be alone in this scene. She would sit at her desk and open the letter and begin reading. As she gets deeper into the letter I would want her to start pacing around the room to show how surprised she is by the contents of the letter. When she begins her monologue she is leaning against her room door but then begins pacing again. I would do this because I feel that it reflects how she is taking in big pieces of information and processing them by walking and pacing around her room.

In this monologue, Shakespere used certain poetic elements to enhance the emotion being portrayed in the scene. As I mentioned before, the main theme in this scene would be Lady Macbeth’s questioning of her husband, Macbeth’s bravery and the use of poetic elements really reinforces the impact of Lady Macbeth‘s emotions. For example, Shakespere used sound effects in this monologue. For example, he used strong sounds the emphasize Lady Macbeth’s emotions and her strong sense of doubt. She uses a lot of opposing sentences in her monologue like, “Wouldst not play false and yet wouldst wrongly win…”. The word ‘wouldst’ is used here for emphasis on her emotions and to show the theme of Lady Macbeth’s doubts.

All in all, the monologue in Act 1, Scene 5 is a prime example of an effective piece of writing by Shakespeare that shows character development in Lady Macbeth, you see her deviance rise and watch her realize how cynical she needs to be.

Eliza, very interesting perspective of Lady Macbeth throughout this monologue. I read Macbeth my freshman year of high school, and your post reminded me of many of my own interpretations of and feelings about Lady Macbeth as her character developed throughout the play. I loved how in the beginning you related the situation to something everyone can relate to–how often people say more than they’re willing to do. I liked also how you showed the progression of character development throughout the specific scene of Lady Macbeth receiving the letter. I think it would also be very beneficial to include some examples from the text just as you did at the end in saying, “Wouldst not play false and yet wouldst wrongly win…” Quotations like these are helpful in supporting the claim you’re making, and I think your claim is a very compelling one. For example, you could quote, “Shalt be what thou art promised” to emphasize your interpretation of Lady Macbeth’s thirst for power. https://litchapter.com/macbeth-by-william-shakespeare-lady-macbeth-quotes