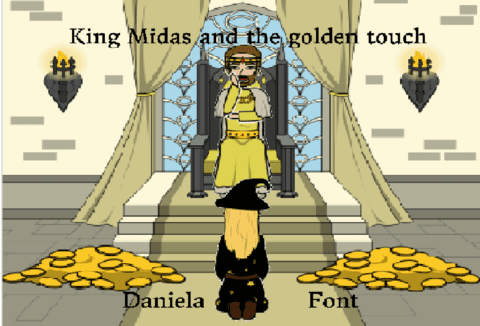 In my school, we take a tech

class and we had to create and animate on a website called scratch, a new

version of a fable and make it interactive; you choose the outcome of the story. We had to split the story in two, before a moral decision and after so we could see the repercussions of the main character’s decisions and animate both endings. The viewer becomes an active part in the story this way. I did the story of King Midas and the Golden Touch where the king must choose whether to accept the power he has been offered or to think about it. In creating this animation we had to create a script along with storyboards above and to the right.

Here is the final Animation from scratch: