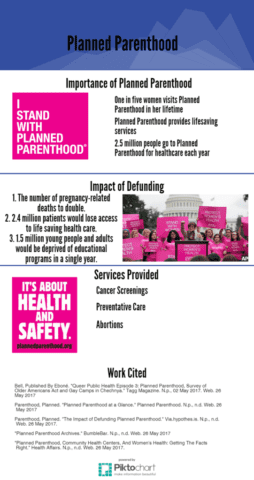 “Planned Parenthood is a non-profit organization that provides reproductive health services in the United States and internationally. In 2014, federal and state governments provided the organization with $528 million in funding (40% of its annual budget). The majority of this funding comes from Medicaid which subsidizes reproductive healthcare for low-income women. In 2014, abortions accounted for 3% of the services they provided. The majority of the other services include screening for and treating sexually transmitted diseases and infections and providing contraception. Proponents of funding argue that federal funding for Planned Parenthood does not pay for abortions and that the vast majority of government funding that the organization receives is through Medicaid reimbursements. Opponents of funding argue that the government should not fund any organizations that provide abortions.”

Planned Parenthood has been there for a lot of women in their difficult times. Many women do not have the money to go to a regular doctor due to the expenses. This is a way that women can take care of their bodies without the costly expenses. Yes, Planned Parenthood does give services including abortion. It is ultimately the woman’s right to say if she wants to have the baby or not.

Keep Planned Parenthood open to help those who can’t speak out. Help women and men who do not have the opportunity to go somewhere else.

Hello Brooklyn, I am interested in your topic. Planned Parenthood is a really good way to prevent unintended pregnancy. Being a parent is not a easy responsibility and parent need to get ready for that. If not, they can make their own choices. “Planned Parenthood says it prevents an estimated 579,000 unintended pregnancies per year.” according to CNN. This statistics is significant which means Planned Parenthood is a good way and people need to have place to seek out help when they want.
Here is useful resource: http://www.cnn.com/2015/08/04/health/planned-parenthood-by-the-numbers/index.html