Justice in the Crossroads

Home Justice in the Crossroads 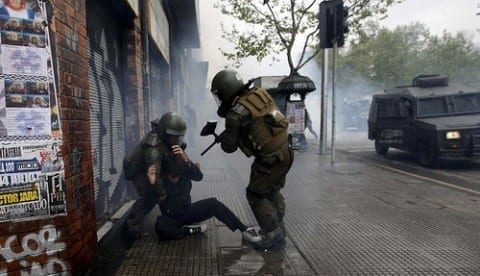 Crimes are plaguing the many streets of Oakland every day. We as a community, depend on the authority of the OPD (Oakland Police Department) to put forth protection around the city. But what happens when those who serve to bring justice, are those who are blind to it? For example, in the past few years, there were and still are “rogue” police officers policing our city and framing innocent civilians for arrests. This blog will focus on giving insights on the Oakland Police Department, police behaviors, and numerous perspectives of individuals on how their community is being impacted by the authorities.

The Oakland Police Department is a conflicting force within the city of Oakland. Like the city it resides in, the OPD has run into many troubles with the community of many Oakland natives. For example, an individual living in the low-income areas of the city who goes by the name of Hayro Estrada has concerns about the late responses of the police department towards crimes and cases. He stated in an interview,”Police don’t arrive for 40 minutes to an hour. When they do come, they shrug you off as if they’re too busy to deal with your problem.”

This comes as a major problem to communities where gangs and shootings are present and active. Some may perceive this to be a blatant showing of the OPD’s uncaring temperament towards the small folks of the city. However, OPD District 3 officer Lt. Henderson Jordan disclaims this by explaining that there are only 24 officers working from 6 in the morning until 4 in the afternoon. He states even further that if there was a serious incident, resources are drained quickly. Whether or not this is a satisfying answer for those unfortunate enough to have faced this dilemma in their community is an open door for interpretation and opinions.

While we rely on officers to protect us daily as we walk the streets of many neighborhoods and other parts of the city, there are times where the officers themselves are perpetrating crimes directly on civilians. Retracting back to the mentioning of “rogue” police officers, they plague the streets violating the rights of many. Racial profiling, unlawful arrests, and framing are just some of the shameful acts these “officers” inflict on many innocents. There are no doubts, that these repulsive “rogues” are one of the causes for the weak relationship between the Police Department and Oaklanders. Some officers who are enlisted officially in the department also abuse the power of their badge, placing heavy authority on people as well. In an interview, retired 25-year OPD veteran, Margaret Dixon, confesses,”I’ve seen black cops take it too far. I’ve seen white cops take it too far, and I’ve seen Latino cops take it too far.” This matter not only affects the lives of several people but also the trust and reputation of the OPD. When police officers report to crime scenes for interrogation, those who are interrogated want to open to someone who can connect to them. It will put the community at ease to know that there officers who are willing to cooperate with and listen to them.This is something that police officers need to take in consideration to build a strong, empathetic, relationship with the people of Oakland.

I have taken the liberty to go around and interview 3 individuals. The information gathered from the interviews are more personal and can be considered more impacting. I interviewed a teacher at my school who, being raised in an interracial family, has several experiences with the police and how one side of his family is treated. Another person who I interviewed was my counselor, who despite not having much experience with the police department, still gives a detailed perspective on the matter. To begin, Jordan Mickens (my math teacher) gives empathy for police officers who work to serve and protect citizens. He states,”I am really torn because I understand what a stressful job it is for police officers to do but at the same time, I have an intense reaction towards the police.” He then shares an incident that happened in the past. “In my old school, there was an incident where an officer was assaulting a student on campus. There were also encounters with my friends who are non-white who were treated poorly by PD. Overall, it is a negative opinion but I can still acknowledge that it is a hard job and that they need to change the way they conduct themselves.” When asked for reasons as to what makes him despise the PD, he responds, “Witnessing the unfair treatment of different people. I also have been in the car when my dad and mom have been pulled over. The treatment during that time was not equitable. It was two completely different experiences. The police officer was more aggressive towards my dad” (Mickens). It is no secret that skin color has become a recurring problem in the operations of the OPD. And considering that Oakland is filled with multicultural areas and neighborhoods, it is an absolute necessity for the OPD to change their protocols when it comes to dealing with people in this city. Moving on to Cathy, my counselor. She had limited knowledge in the regards of the police department. Nonetheless, she still shared some good answers that I believe are significant. When asked about her opinion on the OPD, she stated,”I live in the bay area so I don’t know as much about him. I do know that they have quite a reputation. There was a news about an officer having a sexual relationship with a young girl. It makes me feel distrustful of them. Police should be more professional.” This is an important message for all police officers as it is their job to protect and abide by the law. You cannot expect people to give you authority if you don’t even honor it yourself. Furthermore, Cathy expands on the idea of giving the PD a chance to redeem themselves. She advises,”They need to rebuild trust with the community. Hosting events for the people peacefully without showing any sort of authority as an individual can help with alleviating the notoriety that they have gained from abusing them.

In conclusion, I still believe that the OPD will continue to be a conflicting force within the Oakland community. This is not to say that they are bad for the city. With time and work, all of this can change if they work with the people and the law.

you make some very good points here, i would to add to your idea. i believe that the police suffer from the fact that they are seen as a unified and single entity. due to this if any police ever misbehave then now for that person any police officer is now judged by that person. a second factor for the police is that they are a naturally a position of authority but also a job, and thus any person who craves authority (but probably shouldn’t have it) will gravitate to a such a position. and finally the third problem i see is that the police by their nature deal with a large amount of morally hurtful things and as such must develop a lack of empathy to protect themselves and if they don’t then they risk having bouts of anger, especially when your job is to detain people and have arguments all day.

Hi Arjen,
Great post! Your introductory sentence was eye catching. You were very organized in your post. You introduced your statement, evidence, and conclusion. I want to say that I agree with you. Police should work with the community and the law. It is only that way that both sides can benefit. It is very unfortunate that there are police that do not do their job properly and let their emotions and personality get to them. Your interviews are great examples of real life experiences with police officers. Great job!

Hey Sandra. Thanks for the feedback first and foremost. Anyways, I do find it disappointing that the Police oft forget their purpose and jobs when situations arise. Albeit, it’s hard to deny the fact that many bad things happen daily – especially for officers who work for hours on end. Things aren’t as simple as saying,”If we work together, things will go well for us all”. I know this contradicts my writing since I’ve probably said a statement like this (or at a similar caliber) in my blog. But I guess in the end, we all have to walk the steeper paths in life. To keep asking questions and learn from things we would usually stray from.

again, your feedback is much appreciated x

I really do agree with you. One sentence you wrote that stands out for me is: “There are no doubts, that these repulsive “rogues” are one of the causes for the weak relationship of the Police Department and Oaklanders.” I think it is nice that you point this out because not many do. Some just assume all police officers are bad based on an incident they saw on the news. If people think like that they are no better than racist because they assume, just like racist, that one group of people all act the same.

Dear Arjen, for the most part, I do agree with your concerns on this issue of the Oakland Police Department. One sentence you wrote that stands out for me is: “You cannot expect people to give you authority if you don’t even honor it yourself.” I think that part of being a police is very crucial because even if they have some sort of authority over you, they still should have respect and not abuse their power. I think something that could have made your blog a bit stronger would be if you interviewed an actual Oakland police officer, that’d be really cool! Thanks for writing about this issue, it’s very informative for people who know nothing about this.